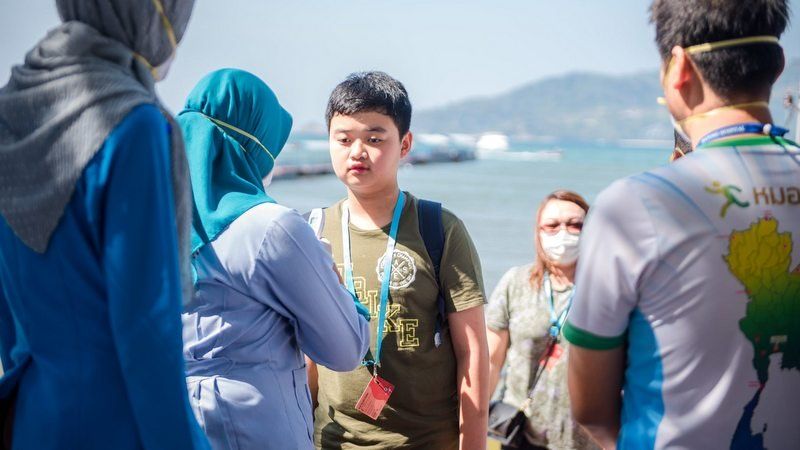 PHOTO: Tourists from a cruise ship from Singapore are screened for elevated body temperature on arrival on shore in Patong - Patong Municipality PR

Amid the flurry of news stories about the Wuhan Coronavirus outbreak, Phuket’s Governor Phakaphong urged people this week to beware of fake news and reports that don’t cite their sources.

One report that went viral this week claimed that a foreign woman had died of the virus at Phuket International Airport. The post, uploaded to Facebook on Monday, showed a photo of a person covered with a white sheet being wheeled out of the airport and loaded into an ambulance.

Along with the photo was a caption in Thai: “One death at Phuket International Airport #Chinese.”

But Sutsinee Sakswut, the airport’s doctor on duty on Monday, confirmed on Wednesday that nobody has died from the “Wuhan flu” at the airport.

Sutsinee explained that female tourist suffered a minor stroke in the arrival hall at the international terminal and was taken to Bangkok Hospital Phuket, adding that she was discharged the following day.

Another post claimed that Chinese tourists from Wuhan were not allowed to board a flight home on January 24 because a 4 year old girl travelling with the group had contracted the virus.

While it is true that a girl and her family members from Wuhan were detained for screening, tests quickly confirmed that she was not infected with the Wuhan virus, and only had a mild case of the flu.

There are currently no confirmed cases of the coronavirus in Phuket, and Governor Phakaphong assures the public: “We are working on measures to control and prevent the Wuhan virus from spreading here. We have set up an ‘Emergency Operations Center’ to follow up on the situation and updates are given through press briefings every day.

“So everyone should check any information first before sharing it online. Anyone who finds fake news reports, please inform the Phuket office of the Public Relations Department or relevant officers so they can check it out.”

More ominously, a report by the Phuket PR office on Wednesday reminds that posting or sharing fake news online is illegal under the Computer Crimes Act.

“If anyone sees fake news on social media, please send an image and details to the Phuket PR Dept Facebook page,” the report noted.