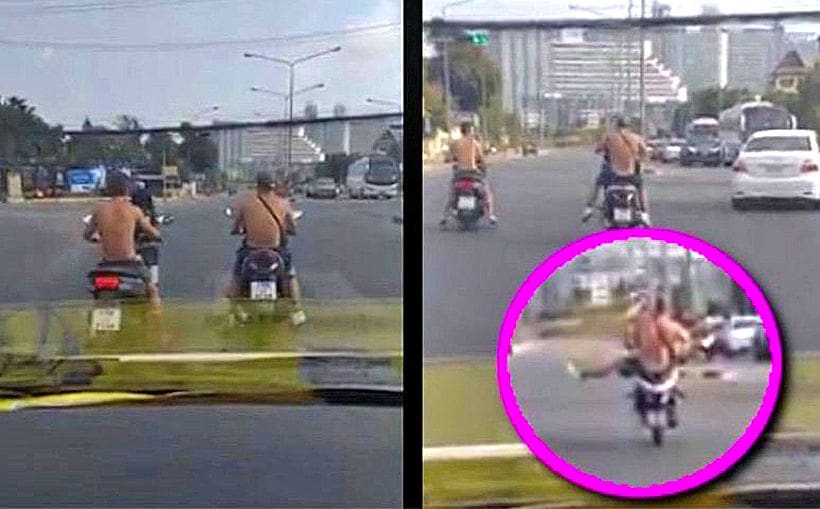 Daily News reports that Pattaya Police are tracking down two foreigners caught on video riding recklessly in the Jomtien area, south of Pattaya.

The video clip shows the two men waiting at traffic lights before racing each other with one man splaying his legs and doing a “wheelie”.

Neither of the pair were wearing a helmet or shirts.

The Pattaya police chief, Pol Col Apichai Krobpetch, spoke to Daily News Online and said he had ordered officers to find the tourists. CCTV at the intersection and along Jomtien Sai 2 is being checked to better identify the bikes and help track down the pair.

Earlier this week it was announced that three Thai motorbike riders had been jailed for doing wheelies along the highway. The jail terms were suspended by the court.

Saewana restaurant was raided at around 11pm last night by officers from Pattaya and the Banglamung district station. Alcohol was served in glasses and the bottles were hidden, police say.

Pattaya News says all 20 people at the restaurant were arrested, including the owner. They face charges for allegedly violating the provincial disease control order. Those who violate the Emergency Decree could face a hefty fine or even imprisonment.

A police officer who spoke to a Pattaya News reporter said that there is a zero-tolerance policy for alcohol consumption at restaurants as the policy has been made clear to the public.