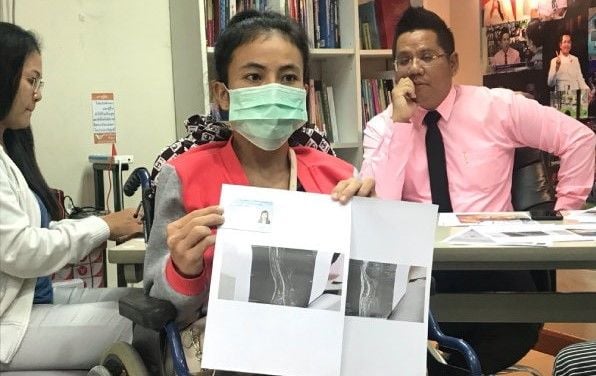 The family of a 28 year old Thai woman who was seriously injured when she fell five floors from a condo balcony in Pattaya are blaming her French husband for the accident.

Sunisa suffered life-changing spinal injuries and is no longer able to walk, with her sister Natchaya having given up her job to care for her. It’s understood Sunisa’s husband is now in France.

The couple shared a condo in the Pratumnak Hill area of Pattaya and Sunisa’s family say they frequently argued, accusing her husband of beating her up. They say the arguments were fueled by jealousy as he believed Sunisa was cheating on him.

On June 16th, during an argument at around 2.00am, it’s alleged the French man became violent, kicking and punching Sunisa, and grabbing her by the throat, causing her to nearly lose consciousness.

When he barred her from leaving by the front door, Sunisa ran to the balcony to call for help but her husband followed her and it was at that point that she fell five floors. At the time, the police and some media reported that she had jumped, which she denies.

Sunisa’s mother and sister have now hired a lawyer who says that if the husband is guilty, he should have faced criminal and civil proceedings. Mr Ronnarong Kaewpetch says he’s taking the matter up with the Crime Suppression Division of the police.