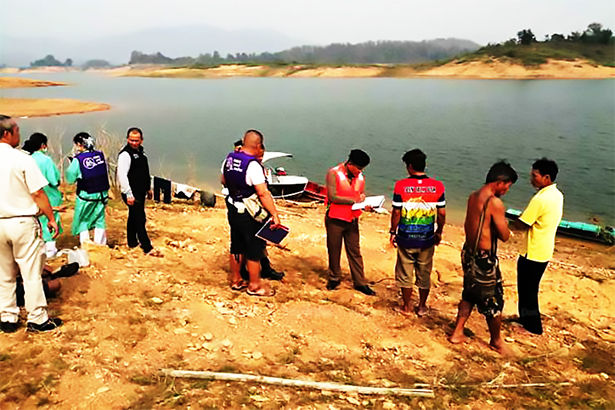 PHOTO: Police question a witness after a passenger boat carrying 11 people capsized in the reservoir of Sirikit dam in Uttaradit on Monday morning. One passenger is dead and four are missing. - Boonnam Kerdkaew

(UPDATE: 7:07am, the Thai-language daily Khao Sod now reports the number of drowned at 5)

One passenger has drowned and four others remain missing (presumed drowned) after their boat struck a submerged tree stump and capsized on Sirikit Dam in the northern province of Uttradit, near the border of Laos.

Rescue workers recovered five passengers and the boat’s skipper from the reservoir, but four remain missing. A woman’s body has been recovered.

Police say the boat was leaving Ban Huay Ta village in Tha Pla district, carrying the boat’s owner-operator, 10 passengers and a car, as well as agricultural materials. It was bound for Ban Tha Rua when it struck the stump, floating just below the surface, near the Koh Men and Koh Tao islands, about two kilometres from its destination.

The director of Phrae provincial marine office says the water level in the reservoir has dropped significantly over recent months and could have contributed to the captain losing his bearings.