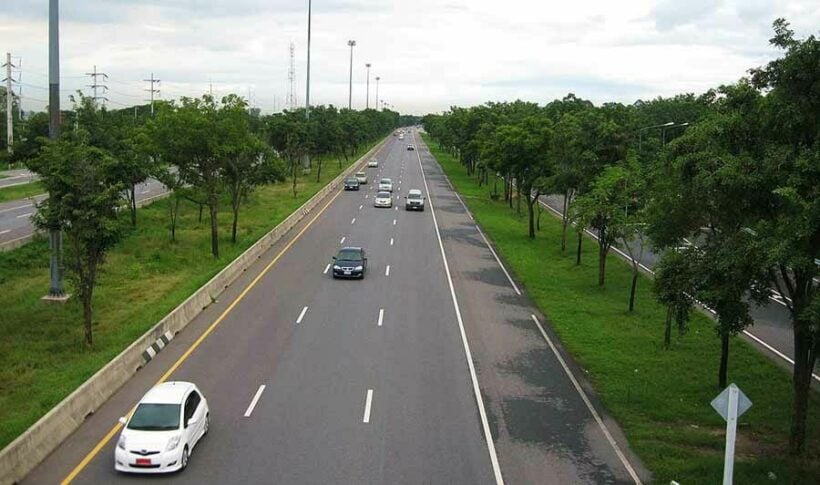 It’s official – the maximum speed limit on 4-lane highways in Thailand has been increased to 120 kilometres per hour, with the new regulation published in the Royal Gazette yesterday. Previously 90 kilometres per hour, Transport Minister Saksayam Chidchob says the increase in the maximum speed limit is aimed at improving the flow of traffic in line with conditions, while keeping road users safe.

The new limit applies only to highways with 4 lanes or more (at least 2 lanes travelling in each direction, divided by barriers). In the case of roads with traffic signs that indicate minimum and maximum speeds, drivers must adhere to those limits when traffic conditions and other circumstances allow. The increased maximum limit will not apply to any roads that have intersections or U-turns. Nation Thailand has summarised the speed limit regulations based on vehicle type and taking the new speed limit into account:

The increase to 120 kilometres per hour comes a month before the huge holiday getaway that is Songkran, or Thai New Year. This year, the government has announced an extended holiday period from April 10 – April 15, in a bid to boost domestic tourism. To coincide with the holiday, the Department of Land Transport has teamed up with car service centres nationwide to offer free vehicle checks.

Jirut Wisanjit from the DLT is urging drivers to get their cars and motorbikes serviced before setting off in order to ensure their roadworthiness.

“This year’s Songkran holidays start as early as April 10 and last until April 15, and we estimate that a lot of people will travel by road to their hometowns or tourist attractions, which could result in a spike in the number of road accidents. The ‘Free Vehicle Check-up for Road Safety’ activity therefore aims to urge owners to keep their vehicles in the best condition to prevent any accident and promote road safety for all. Under the campaign, vehicle owners can avail of free check-up services at participating service centres nationwide.“

According to the Nation Thailand report, the comprehensive check-up will include brakes, tyres, wiper blades, oil leakage, lighting and signals, and air filters, among others. Jirut says participating auto-service centres will display an advertising banner to advise drivers. The DLT is also advising drivers to adhere to the rules of the road, including the wearing of seat belts, sticking to the speed limit, not drinking and driving and ensuring drivers get the recommended rest time of at least 7 or 8 hours before getting behind the wheel.