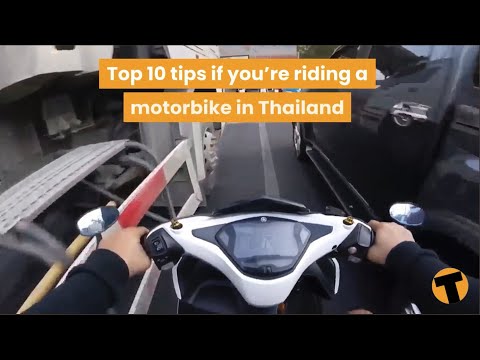 Motorbikes and scooters are the most popular mode of transport in Thailand, and most of south east Asia. In many cases, they’re the ‘engine’ for the local economies. Most of them just go and go and go, they’re astonishingly reliable. Getting around on a motorbike is easy enough and will get you to your destination faster, whilst the cars and trucks are plodding along in the traffic.

But riding a motorbike in Thailand can also be very dangerous. If you stick to the common sense basics – ride within the speed limits, wear a bike helmet, obey the traffic rules and don’t drink and drive – it remains a perfectly reliable way to get around.

Here’s our Top Ten tips to make your journey on the motorbike safer, and, more comfortable.

Number 1. Wear appropriate clothes. Falling off a motorbike without anything covering your knees or elbows, is going to be painful enough – having at least some fabric between you and the road is going to reduce the painful grazes a bit. Long pants and a long shirt are a good start. Always wear shoes for the same reason. And a motorbike helmet as well – it’s the law and it could save your life.

Number 2. Keep your bike in good condition. As hardy and reliable as the modern motorbikes are, they will run better and for longer if you keep up the service schedule, and change the oil around once a month. Apart from changing the engine oil, keep an eye on the tyres as the road surfaces in much of Thailand, plus the heat and humidity, will wear down your tread quickly. Your brakes will also need checking. Then there’s the lights at the front and back, which are your best way to inform other driver’s what you’re doing in the traffic. Indicators may not be used much by the locals, but YOU should.

Number 3. Make sure you have a proper license. Your car license in your home country isn’t legal in Thailand to ride a motorbike. Your International Drivers License for cars, issued in your home country isn’t going to cut it either. Legally, the only document that will satisfy the Thai legal system, officially, is a Thai motorcycle license. Keep this in mind if you want to rent a motorbike! If you live in Thailand you simply must get a proper motorbike drivers license of you want to ride a motorbike here. And whilst we’re talking about a Thai Motorbike License, we’re talking about the ones you get from the Land Transport Offices, not along Khao San road for 500 baht!

Number 4. Check your travel and health insurance. Every week The Thaiger hears from tourists stuck in a Thai hospital with mounting hospital bills and an insurance company that won’t pay out because they didn’t have a proper drivers license. Or no insurance at all. And even if you have travel or health insurance, check the fine print because most insurance contracts don’t include driving on motorbikes in Thailand.

Number 5. Driving is different in Thailand. Many of the rules are the same as countries that also drive on the left-hand side of the road. But it is a totally different vibe. Apart from the lunatics that drive too fast, drink-drive or ghost ride…. That’s driving against the flow of traffic on the wrong side of the road…. there’s just a different attitude to driving. It’s a bit like swimming with a school of fish… if you just go-with-the-flow, and keep in the stream of traffic, you’ll generally do well. Be extra careful and mindful if you’re not used to the flow of Thai traffic. Number

Number 7. Have a practice. If you’re either new to driving a motorbike or new to driving a motorbike in Thailand don’t thrust yourself into a busy stretch of road immediately. Try something a little calmer and slower to get a feel of the subtle differences in Thai traffic movement. You’re sharing the road with trucks, cars, buses and passenger vans.

You’re meant to stay on the left hand side and you’d be well advised to do so, despite the behaviour of some Thai motorbike drivers that want to mix it with the ‘big boys’. Get some confidence with your motorbike and way it handles, and moving in and around traffic on a quiet road before you tackle the main roads.

Number 8. There’s pot holes, then there’s POT HOLES. The roads around Thailand have really improved in the past decade but you’ll still find pot holes in places there wasn’t one the day before. If you want a really good reason for giving plenty of distance between you and the car in front, it’s to see the pot hole before you end up IN it. Whilst car tyres might glide over these holes in the road, your motorbike is likely to come to an abrupt halt, with you continuing over the front of the handlebars – something to do with Newton’s first law of motion.

Number 9. If you’re not sure, don’t. Never ridden a motorbike? Didn’t ride a motorbike in your own country? There’s two good reasons not to try it for your first time in Thailand.

It can be a bit of a challenge for even experienced motorbike drivers, well different anyway. There’s plenty of other ways to get around and if you want THAT selfie for your Facebook page there’s thousands of bikes parked by the side of the road where you can get a photo. Just because your friends did it when they travelled to Thailand doesn’t mean you have to.

Number 10. Police will often arbitrate on the spot at an accident. If you are in the wrong and damaged someone or someone else’s bike you’re probably going to have to pay up. Now, there’s the ‘official’ way to sort things out in these case and the ‘unofficial’.

The policemen will get to the scene soon enough and, often, decide there and then who was at fault. They’ll often negotiate how much should be paid as well. The urban myth is that Thai police always side with the the locals – that’s not the case although, if you are indeed in the wrong then you’re IN THE WRONG!

If you are concerned that you’re being rolled by the locals in sorting out a simple motorbike accident then call the Tourist Police or your consulate immediately. DON’T agree to pay any money to anyone until you’ve spoken to at least the Tourist Police.
Getting into an argument with the local police will almost certainly guarantee you’ll come off second best. Demanding that you speak to the police chief, etc, will also usually end up in the situation not going well in your favour. Be patient and don’t lose your cool. You are in a foreign country, you’re a guest and they do things differently – end of sentence.