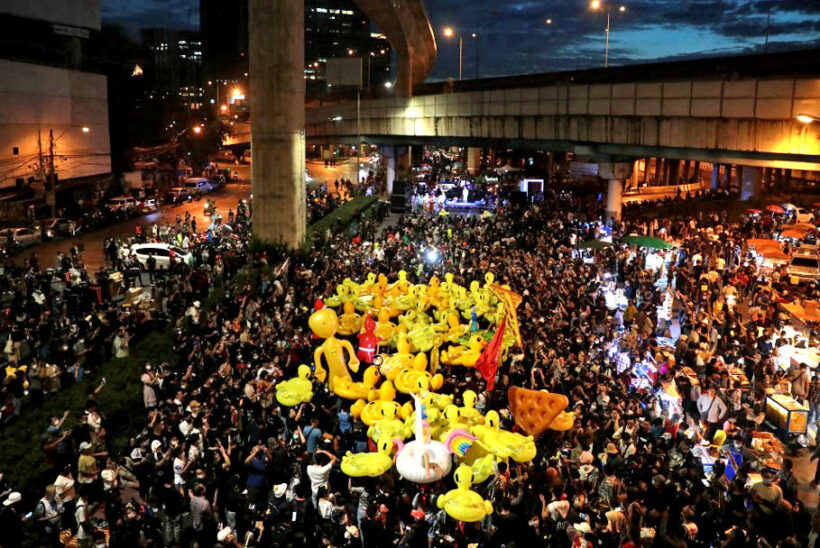 If you think the current spate of rallies are ruling out of steam, think again. Yesterday’s large protest around the Lat Phrao intersection on Phahon Yothin Road was just the first of 3 days of planned protests around Bangkok and Samut Prakan. Protesters yesterday described their action as an “anti-coup drill”, claiming that the coup “chatter” continued and that they would strenuously protest against another Army-led action against Thai citizens.

The yellow ducks and a few other inflatable animals were again taking front stage in a rally that was described more like a picnic than a political demonstration.

Then tomorrow protesters plan to hold another rally in front of the . Imperial World Samrong shopping centre.

A spokesperson for the Metropolitan Police says there will be up to 500 crowd control police attending to each of the protests, adding that the rallies had been given formal permission to go ahead and police will be ensuring that no laws are broken.

The government has come under a barrage of criticism from NGOs and rights groups about some of the heavy-handed responses and baiting at rallies to “create” the appearance of conflict. Yesterday the Foreign Ministry issued a statement via their spokesperson, Tanee Sangrat in response to the criticism.

13 international organisations – including Amnesty International, Human Rights Watch, the Asia Democracy Network, and the Asian Forum for Human Rights and Development – have made official submissions about the response from police and handling of the rival protest groups, which resulted in the shooting of 6 people and other protesters injured by the high power water cannons and tear gas deployed by riot police..

The Ministry spokesman maintained that Thailand had “upheld the rule of law and respected the judicial process with transparency. In handling recent protests, the authorities have enforced the law in line with international standards, with the appropriate response to the situation.”

The spokesperson said that participants in the November 17 outside the Thai Parliament broke through concrete barricades and tried to reach an “off-limits area”, forcing police to take action to bring the situation under control. Protesters told police that they wanted to get to the front of the parliament buildings to protest the debates that were being conducted inside.

“The operation was proportional to the situation and was not excessive. Those who want to exercise their right to assemble must follow the law and consider the safety of others.”

Organisers of yesterday afternoon’s rally, the United Front of Thammasat and Demonstration, called the rally “an anti-coup drill”.

“Undeniably, speculation about a coup has been rife. It should not happen. But history teaches us that we cannot trust. Therefore, all are welcome for a drill to cope with another possible coup”.

Current Thai PM Prayut Chan-o-cha, as head of the Thai Army before the May 2014 coup, maintained that the army would not intervene and oust the Yingluck Shinawatra government.