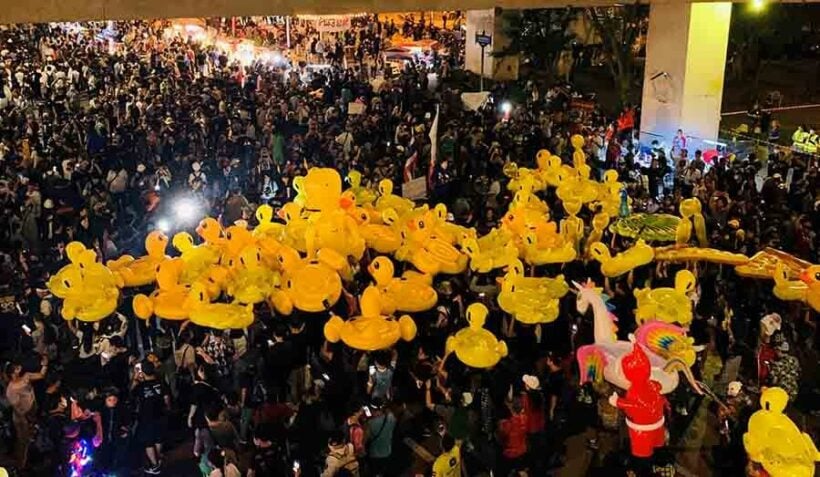 Around 5,000 pro-democracy activists gathered at the Lat Phrao intersection in the Chatuchak district of Bangkok last night, to oppose any potential coup, a situation continually denied by the current PM. Last night’s gathering took the form of a picnic, at which mainly north-eastern dishes were served. Protesters described it as a rehearsal against military intervention, with one 18 year old activist, named only as Tan, saying history cannot be allowed to repeat itself.

“I’m only 18 but have seen 2 coups already. That’s not right. We don’t want history to repeat itself.”

The rally was announced on Facebook by the United Front of Thammasat and Demonstration, who say the Thai people have had enough of coups that oust elected governments. They described the event as “a drill against a coup d’etat”.

“There have been too many coups in the past, so history has taught us to remain vigilant. Therefore, we would like to invite everyone to participate in a drill to prepare for another coup that could happen.”

Army chief Narongphan Jitkaewtae has previously dismissed rumours of an impending coup, but the Ratsadon (People’s Movement) group have voiced their distrust of the current military regime, saying history would indicate otherwise. Protest leader Panupong Jadnok, aka, “Mike”, says the gathering last night is a powerful illustration of people’s opposition to a coup.

According to a Nation Thailand report, there have been at least 12 successful coups in Thailand, an average of 1 every 7 years, since the country moved from an absolute monarchy to a constitutional monarchy following the Siamese Revolution of 1932. The last military coup was in May 2014, which brought former army general Prayut Chan-o-cha to power, where he has remained ever since.

One woman at last night’s rally, a 32 year old named Natalie, says the 2014 coup has proved a disaster for the country and it’s time for urgent change.

“Now is a crisis time in Bangkok and Thailand. I want new elections and to change the prime minister and for a new government to actually listen to the people.”

Last night, the yellow ducks were out again, this time being used to represent the army. Protesters passed the ducks over their heads, to symbolise the military moving over the people to take a front row seat on the political stage. Activists flashed the 3-fingered salute at the rubber ducks, a gesture originally derived from The Hunger Games, that has become a powerful anti-establishment symbol. Activists also burned pictures of former coup leaders, including the current PM.

Last night’s gathering follows another one in the capital on Wednesday, when thousands rallied outside the headquarters of the Siam Commercial Bank. The Bangkok Post reports that another protest is planned for today, in front of the Imperial World Samrong shopping mall in Samut Prakan, just outside Bangkok, and a further one tomorrow, at the Imperial Lat Phrao mall.