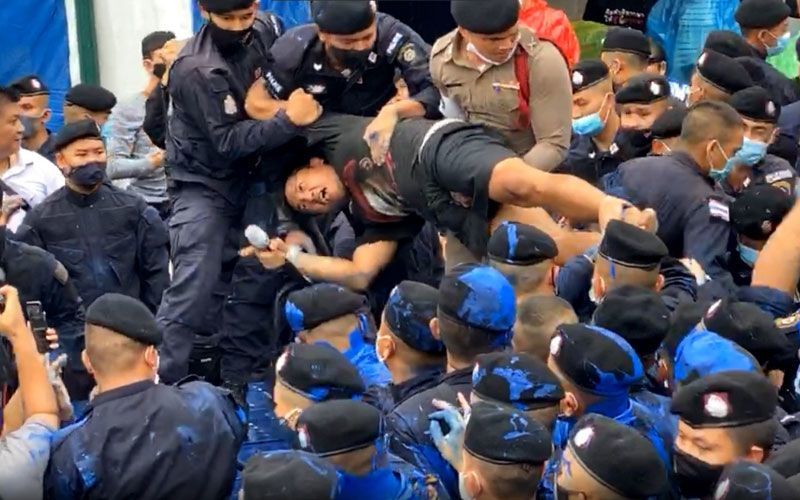 Today’s pro-democracy rally in Bangkok poses an “elevated risk of unrest” after 21 protesters were arrested yesterday, according to an email sent to staff of the United Nations Department of Safety and Security. The email advising the staff to avoid protest sites was obtained by local blogger and Samut Prakan school employee Richard Barrow and Samut Prakan school employee and posted it on his Twitter page.

The pro-democracy rally was set to start at 2pm today at Bangkok’s Democracy Monument, but some started yesterday, protesting a Royal motorcade which is also scheduled today to go along the protest route. Some protesters splattered blue paint on officers. 21 protesters were arrested on charges of placing objects in the road, using a sound amplifier without permission and creating a gathering of more than 10 persons “to do an act of violence, or an act that breaches the peace.”

Protesters were seen early this morning at Democracy Monument as well as counter protesters wearing yellow, appearing to be from the police and military due to their shirt logos and high-and-tight haircuts. The counter protesters walked in a straight line, blocking pro-democracy protesters who held their hands up in a 3 finger salute, a symbol for government resistance.

The UN office is near the Government House where the protesters say they plan to “set up camp” for possibly a month to put pressure on PM Prayut Chan-o-cha to resign. The UN department says the rally may impact the access to and from the UN office.

“Given the outcome of the 13 October 2020 gathering at Democracy Monument and protests following the detention of 21 protesters, there is an elevated risk of unrest.”

The UN advises staff to avoid protest locations, which is expected to gather tens of thousands, to adhere by instructions by Thai authorities and to watch what they say, both in person and on social media.

“Refrain from any speech that is critical of the government and/or monarchy, both in person and online, as defaming the monarchy is punishable under Thailand’s lèse majesté laws.”

The United States Embassy and Consulate Thailand released an alert earlier this week advising Americans about the political rally, saying that while violence is not expected, “even peaceful demonstrations can turn confrontational and escalate into violence.”

“Avoid demonstration areas, and exercise caution if in the vicinity of any large gatherings or protests. U.S. citizens should monitor locals news and social media reports before travelling to downtown Bangkok.”

According to the United Nations Department of Safety & Security, there is “an elevated risk of unrest” today following the detention yesterday of 21 protesters. In an email sent to their staff, they advise to avoid the protest site at the Democracy Monument #ม๊อบ14ตุลา #Thailand pic.twitter.com/1Lo2CjRV10