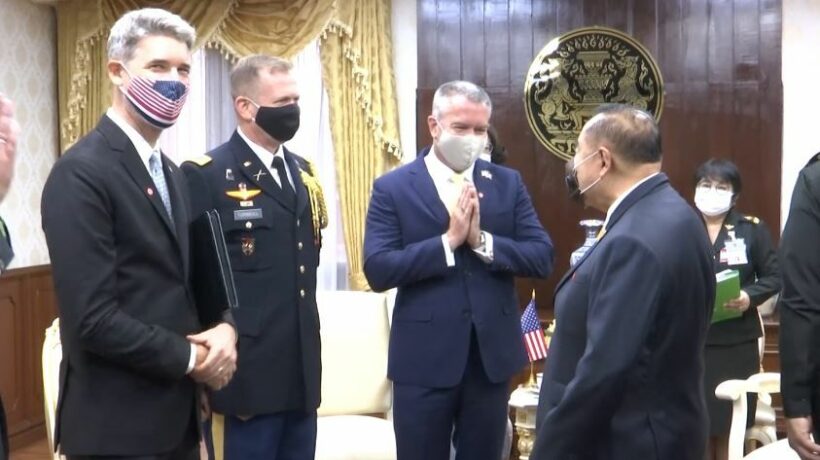 The US ambassador to Thailand is pledging to help Thailand achieve its goal to be upgraded from Tier 2 to Tier 1 in the annual US Trafficking in Persons Report. The report divides countries into tiers based on their compliance with standards outlined in the US Trafficking Victims Protection Act of 2000. Tier 1 comprises countries whose governments fully comply with TVPA minimum standards.

Tier 2 is for countries whose governments do not fully comply with TVPA minimum standards but are making significant efforts. Speaking after a meeting with Deputy PM Prawit Wongsuwon, Ambassador Michael George DeSombre said yesterday that Washington stands ready to support Thailand in the ranking elevation, as Prawit requested. Prawit said he has already seen the TIP Report 2020, in which Thailand remains at Tier 2.

Prawit says Thailand is determined to continue working hard to tackle the human trafficking problem, and the issue is high on the country’s priorities but involves cooperation from all sides to tackle.

“All parties involved in this work are ready to fully cooperate with the US in the continued fight against human trafficking.”

“Thailand does not fully meet the minimum standards for the elimination of trafficking but is making significant efforts. The government has generally demonstrated increasing efforts compared to the previous reporting period although the country remains on Tier 2.” – US Trafficking in Persons Report

The efforts include anti-trafficking training for judges and working with non-governmental organisations to arrange trauma care training for police, prosecutors, and shelter staff, according to the report. The government investigated more cases of labour trafficking compared to the previous reporting period, and convicted traffickers faced stiffer penalties.

It also increased the amount of compensation provided to victims through the anti-trafficking fund and handed out restitution to victims of trafficking for the first time during the reporting period.