The ‘Monkey Business’ story has drawn a lot of attention following the People for the Ethical Treatment of Animals’ companies about alleged abuse and misuse of trained macaque monkeys to pick Thai coconuts for commercial purposes.

After a week of articles, videos and debate about the relative merits of using monkeys to pick coconuts, the Thai Agriculture Minister formerly invited international delegates to come and inspect the situation and “see for themselves”. But they’re not going to a monkey training farm or an older style ‘family’ farm that still uses monkeys to pick coconuts.

Diplomats from European embassies in Bangkok are heading to southern Thailand where they will visit coconut plantations of specially bred short-stemmed coconut trees. They won’t find any monkeys there. More evolved primates do the picking of the coconuts in the plantations that the Thai government are taking the delegation.

Deputy Agriculture and Cooperatives Minister Mananya Thaiset says the Ministry of Agriculture and the Ministry of Commerce are taking the European diplomats and media to visit coconut plantations in Surat Thani to witness the human picking of coconuts using specially designed from the coconut trees. The hybrid dwarf varieties grow up to 3 metres in height in comparison with the original taller coconut tree which can grow 20-30 metres in height.

PETA was complaining that the industry was still centred around monkeys being specially trained to pick up to 1,000 coconuts per day. They claimed the methods used to train the monkeys were ‘abusive’ and that the monkeys were over-worked and not treated well. The animal rights group lobbied for retailers of Thai coconut products to boycott coconuts and coconut milk manufactured in Thailand.

Supermarkets and retail stores in the UK and other European states have banned Thai coconut milk and coconut water in the wake of allegations raised by PETA, that monkeys had been abused into picking coconut fruit in the kingdom. 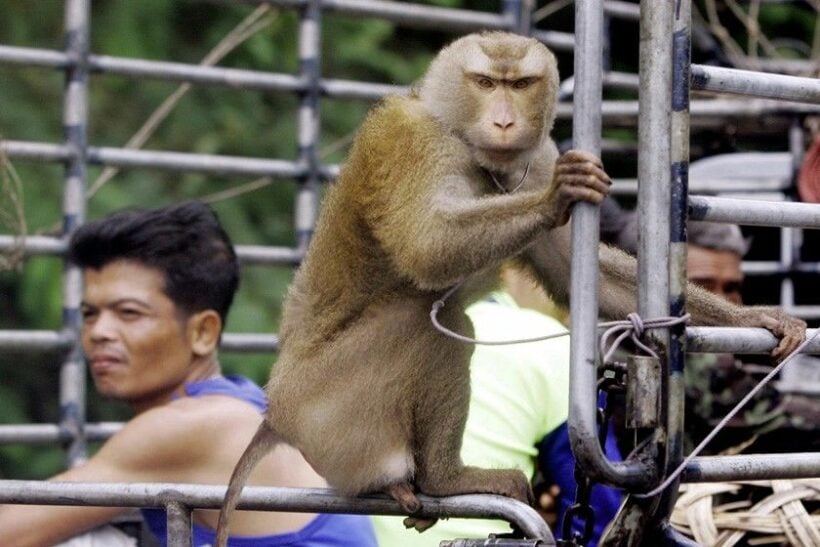 When government officials go to great lengths to deflect and deny the documented cruelty inherent in forcing primates to harvest coconuts, the public wonders why. Kind people aren’t buying all the disingenuous dismissals.

Denouncing cruelty to animals is not disrespecting racial and cultural diversity. PETA has long campaigned against entrenched “norms” like foie gras, bullfighting, and the dairy industry. PETA speaks out against all exploitation and abuse of animals, wherever it occurs.

Race doesn’t have anything to do with stealing monkeys from their homes and families, chaining and caging them, and forcing them into servitude. Proponents of such acts are clinging to something that needs to end now.