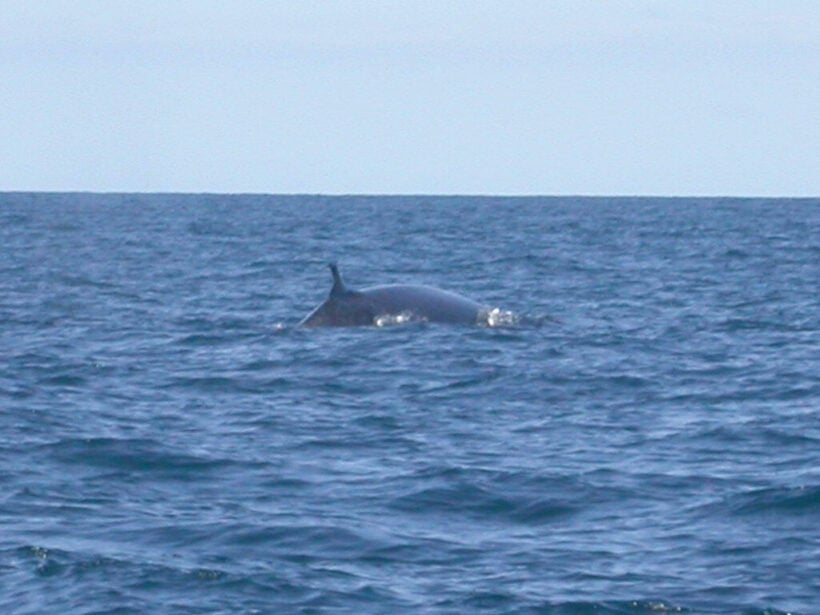 2 more Bryde’s whales are gracing the waters off Koh Samui, after tourists spotted the marine mammals in Ang Thong National Marine Park. Wichwut Jinto, the provincial governor says park officials heard about the sightings and went out to confirm them.

The whales were swimming near the islands of Hanuman, Thai Plao, Hin Dap, Wua Kantang and Sam Sao. Wichawut says 2 of the 4 whales were newly discovered with officials naming a mother, “Wandee” and her calf, “Wan Yud.”

Tour operators say the new sightings indicate the richness of the marine life around the Ang Thong archipelago and advise tourists and fishermen to steer clear of them in order to protect them.

Respected marine scientist Thon Thamrongnawasawat said on his Facebook page that the Bryde’s whale is a protected marine mammal, as there are only about 50 in the Gulf of Thailand as well as a smaller amount in the Andaman Sea.

The Bryde whale grows to 13-14 metres long. Bryde whales are usually found in the inner part of the Gulf of Thailand between September and January, when fish are abundant. Early this year, a group of Bryde whales was sighted in the area of Ang Thong archipelago for several days. The discovery of more Bruda whales in the area would certainly bring smiles to the faces of all people who love the sea of Thailand.”

Meanwhile, Koh Samui is hoping to reopen for vaccinated tourists by October without requiring such travellers to undergo a mandatory quarantine. The plan would include the need to vaccinate at least 300,000 residents to achieve herd immunity on the tourist island. Samui officials say they are waiting for the plan to be approved.

The plans would join that of Phuket, as Samui features its own airport, which would allow it to be the first area in Surat Thani province to test such quarantine-free entries.