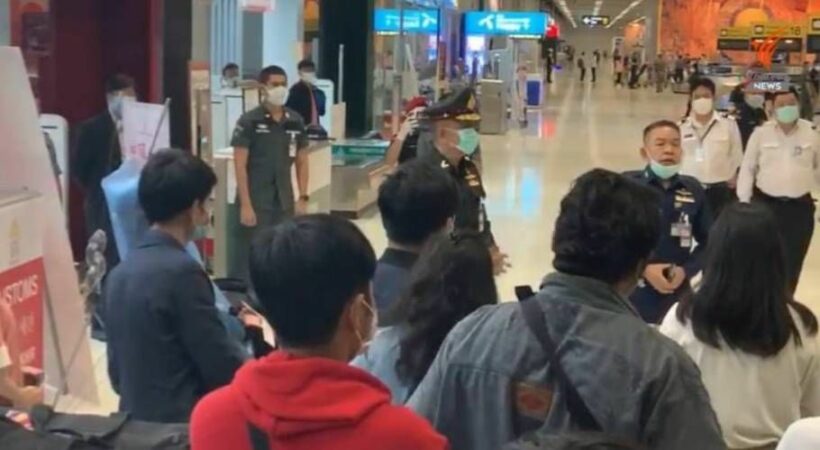 152 Thais who arrived home from the US on Friday were inexplicably allowed to return to their homes to self quarantine, rather than endure the mandatory 14 day quarantine at state facilities faced by other arrivals. As a result, the permanent secretary of the defence ministry has recalled an army major-general from Suvarnabhumi International Airport and ordered an investigation.

A defence ministry spokesman says that the fact-finding committee will decide whether Major-General Kosol Chujai, a specialist attached to the Office of the Permanent Secretary of Defence, broke the chain of command and acted beyond his authority.

The spokesman told reporters the ministry has deployed personnel to support health officials in screening passengers arriving at both of Bangkok’s international airports.

On Friday a stand-off ensued at Suvarnabhumi Airport after several arriving passengers vehemently refused to be quarantined, either at state facilities or in hotels, claiming that they were not told in advance about the requirement. The Foreign Ministry, however, has confirmed that all were informed when they registered to return home at Thai diplomatic missions in the US.

The situation was made worse for some later arrivals when they weren’t allowed to leave the airport after 10pm, the start time of the new national curfew.

Kosol allegedly spoke to the passengers and agreed to let them leave the airport, over the reported objections of health officials at the scene.

On March 3, the Sports Authority of Thailand sent a letter to the manager of Lumphini Boxing Stadium in Bangkok, instructing a postponement of a major boxing tournament, to be held on March 6. The manager of the stadium, Rachit Arunrangsri, is also head of the Army Welfare Department. He too, has contracted the virus.

That warning was ignored as well and the tournament went ahead, resulting in a cluster of over 50 infections scattered across the country, now known as the “Lumphini boxing match cluster.”