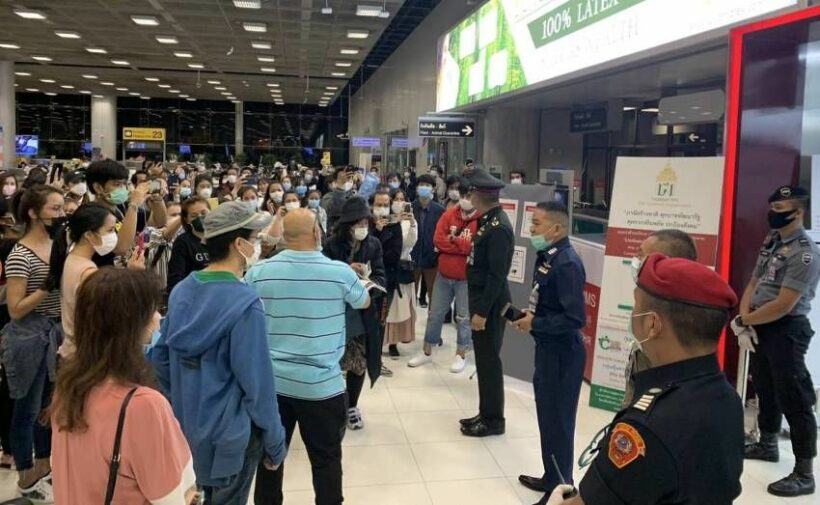 The Thai PM Prayut Chan-o-cha has told 152 Thais who landed at Suvarnabhumi International Airport yesterday afternoon, and refused to enter the state-organised quarantine, to report themselves before 6pm tonight (Saturday) so they can start their 14 day supervised quarantine, or else.

A total of 158 Thai passengers – 103 from a Japan flight, 11 from Qatar and 44 from Singapore – arrived at the airport around 1pm on Friday. But only six of them agreed to be sent to pre-prepared locations that had been organised by government officials – a hotel in Bangkok and specially prepared facilities in Sattahip, south of Pattaya.

The remaining 152 refused to cooperate, saying they had not been informed about the situation in advance, demanding to be allowed to return to their homes.

A spokesperson say that “the government had their personal information and could track them down”, warning about legal action. He also urged people they meet in the meantime to self-isolate for 14 days.

A meeting late this morning of the Centre for Covid-19 Situation Administration decided to track down the rest of the passengers and force them to go to the special quarantine hotel.

Of course, throughout all this debacle, and the rounding up of these errant passengers, more people will potentially be exposed to the virus if any of the passengers happened to be infected.

Many of the passengers protested vehemently that they had not been properly informed. The situation was made worse for some later arrivals when they weren’t allowed to leave the airport after 10pm, the start time of the new national curfew.

As a result of yesterday’s mess, the Civil Aviation Authority announced a few hours later a ban of all international passenger arrivals until Monday night to prevent further confusion and miscommunication. Meanwhile hundreds of foreigners, booked onto flights to return to their countries over the weekend and Monday, are again stranded because their flights can’t land. More than 3,500 people are thought to be affected, causing more headaches and stress for authorities, airlines, and the families and friends of the passengers.

Hundreds of Thai citizens refused mandatory Covid-19 quarantine orders at Bangkok Suvarnabhumi airport after returning from abroad last night. Flights from the US and Japan carrying Thai nationals landed at the Suvarnabhumi Airport yesterday, as citizens were returning home on emergency flights to be with family during the Covid-19 coronavirus pandemic.

Many were unaware of the strict government emergency measures introduced on Thursday demanding all arrivals to be quarantined for 14 days and having to submit government health checks. Arrivals who landed after the 10pm curfew were also prohibited them from leaving the airport. The typical means of returning home – taxis, buses, airport link – were all banned from picking up passengers and violators faced up to two years in prison if they left the airport.

The new rules erupted into chaos in the arrivals area near the baggage claim. Some passengers, according to Thai Media Agency, allegedly tried to run past airport security and health care workers.

Passengers who expected to return home were confronted by officers who told them they would need to go to a quarantine facility for 14 days. An officer said, “taking orders from the government and the rules must be adhered to for the safety of the public”.

Thailand currently bans non-residents from entering the country under the current emergency situation, but Thai nationals are allowed to return if they have a letter from the Embassy and a ‘ fit to fly ‘ certificate before boarding.

With regard to the 14 day quarantine on arrival, PM Prayut Chan-o-cha said, “Related agencies will coordinate with Thai embassies to ensure all Thais returning home will be quarantined and get proper medical checks.”

Dr Taweesin Visanuyothin, spokesman of the government’s Centre for Covid-19 Situation Administration, said the new measures started this week and would continue until April 15.