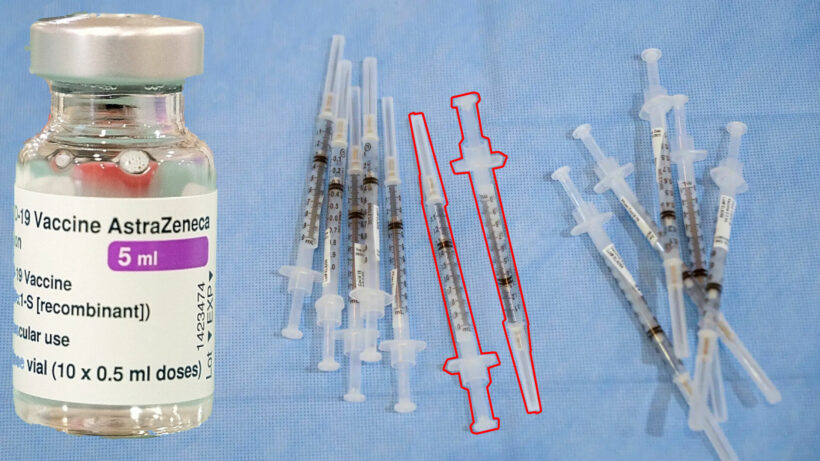 The Department of Disease Control in Thailand has come under fire for plans to stretch vials of AstraZeneca to get more Covid-19 vaccines out of each vial. While the official recommendation is to produce 10 vaccines out of each AstraZeneca vial, the DDC argues that there’s enough material inside to produce up to 12 shots. The government has been receiving increased criticism ever since Deputy Prime Minister and Public Health Minister Anutin Charnvirakul announced the plan.

The director-general of the DDC explained that the plan to squeeze two extra Covid-19 shots out of each vial follows World Health Organization guidelines. One dose of the AstraZeneca vaccine requires 0.5 cubic centimetres, meaning a vial for 10 doses as it is packaged from the manufacturer must contain 5 cc of the serum.

But AstraZeneca’s packaging actually contains 6.5 cc in each vial, meaning that 1.5 cc goes to waste for every 10 vaccines administered. Thailand has a plan to use a special type of needle called a low dead space syringe, which is less wasteful than a traditional needle, as the name implies. By using the vials more efficiently, health officials believe they can safely get at least 11, if not 12, shots out of each vial.

The DDC insist that this will not affect the efficacy of the AstraZeneca vaccine against Covid-19 and stresses that the World Health Organization agrees that the contents of the vial are actually greater than AstraZeneca’s recommended usage on the label. Not only would that allow Thailand to vaccinate 10 to 20% more people in a faster time frame, but it would also save over a billion baht in vaccine costs.

Thailand has struggled to quickly roll out Covid-19 vaccinations, with new plans being announced daily and scrapped sometimes even hours after. But the lack of available vaccines is one major obstacle that this technique may put a dent in. The country is planning a large-scale June 7 rollout, focusing on frontline health care and medical staff and other essential workers and at-risk demographics. People who work in direct contact with the public and with large numbers of people like retail workers and teachers and school employees are also being targeted for quick vaccination, especially before the upcoming school year begins.