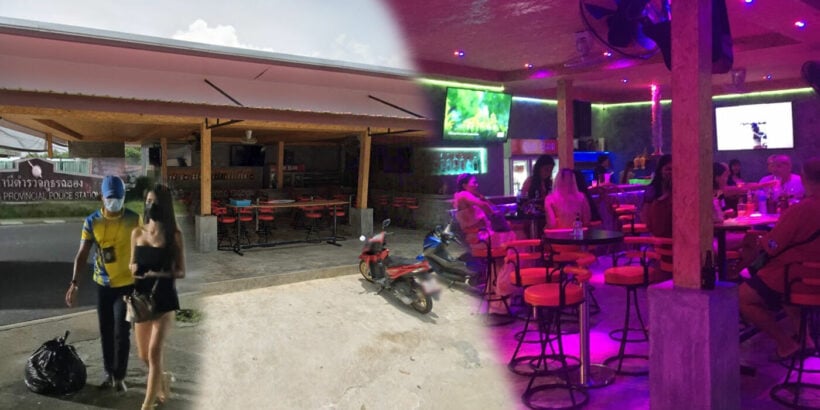 PHOTO: The Honey Pot Bar in Rawai was raided for selling alcohol to foreigners. (via Google)

The Honey Pot, a popular bar in Rawai, Phuket, was raided last night, with the manager being charged for serving alcohol in violation of Covid-19 restrictions. The Chalong Police arrived around 10:20 pm after receiving a tip about a local bar selling alcohol the foreigners. The bar manager was taken into custody and brought to the Chalong Police Station.

The Phuket province has been cracking down on illegal drinking, gatherings, and other violations of the Covid-19 restrictions in place to help curb the spread of the virus as the government pushes to vaccinate everyone and make Phuket safe for international reopening in July. On Thursday night, police launched a patrol and raids all around the Thalang District in central Phuket, before last night’s raid in Rawai.

Phuket authorities have drawn criticism for the extremely strict safety measures in place, with police breaking up home parties with only a handful of people, and enforcing laws that ban alcohol for gatherings of more than 2 people.

The Honey Pot raid saw the Chalong Police joined by Territorial Defense Volunteers after a local resident called in to complain that foreigners were being served alcoholic drinks at the bar. The manager was charged with breach of the provincial order where restaurants are banned from the selling and consumption of any alcohol on their premises.

Thursday night’s raid in Thalang also had the Territorial Defense Volunteers joining the police to inspect the popular Boat Avenue and surrounding areas. On the instruction of Phuket’s vice-governor and led by the Phuket Provincial Office Chief, the surprise inspections found that most establishments on Boat Avenue were in compliance and following current Covid-19 safety regulations, as were almost all other businesses nearby.

On a side note, during the blanket inspections on Thursday night, police also reported bringing 4 teenagers to Thalang Police Station for driving motorbikes near Heroines Monument without license plates.

Tjampman
I am gonna go to the hotel bar now, to repair my hang over and read this article. Well, I don't know maybe phuket is more strict than elsewhere, I just find it insulting that some bars allowed to be…

DDC justifies plan to get 2 extra doses per AstraZeneca vial