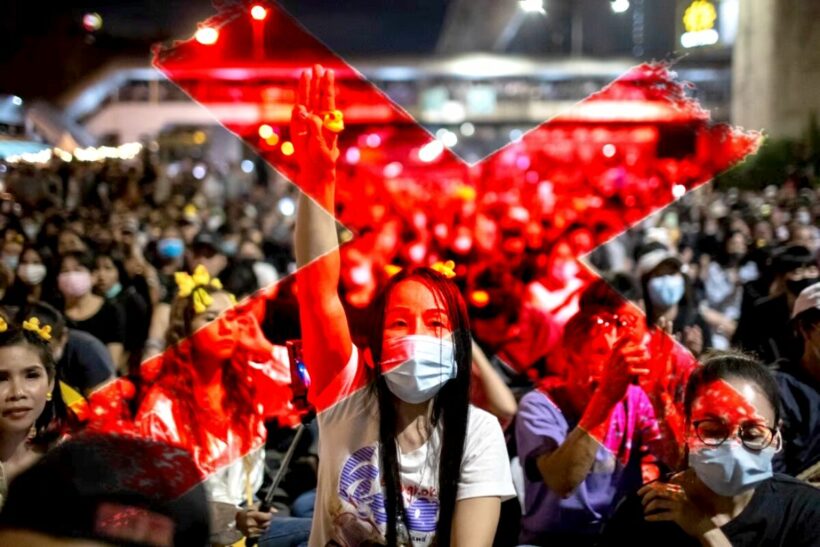 A new ban on public gatherings has been published in the Royal Gazette to combat the recent surge of Covid-19 infections in Thailand. The rule restricting unauthorised public assemblies is permitted under the Emergency Decree that was recently extended for a 19th time, as it has been every two months since it was instituted towards the beginning of the pandemic in March of 2020.

Chalermpol Srisawat, Chief of Thailand’s defence forces, is the chief officer in charge of solving emergencies related to security affairs and made the announcement of the new rule, ratified in the Royal Gazette yesterday. The restrictions are said to be in response to the increase in deaths, severe Covid infections and hospitalisations recently, despite high levels of vaccination and booster shots.

The restriction on gatherings is one of the main reasons people oppose the Emergency Decree, which created the Centre for COVID-19 Situation Administration and gives the government sweeping powers to enact regulations to combat the coronavirus pandemic. Rights groups and pro-democracy activists who had been consistently rallying in the streets against the government see this as a way to prevent them from protesting. The ban is expected to stay in place at least until the 2022 Asia-Pacific Economic Cooperation Summit in November, preventing opponents from demonstrating.

The ban on public gatherings comes with hefty punishment to deter non-compliance – up to a 40,000 baht fine and two years in prison. It applies not just to large assemblies, but can be applied to any activity the government believes contributes to the spread of Covid or increases hardship on the people of Thailand.

While 53.5 million people have been vaccinated (31 million with booster shots too), Thailand is seeing around 2,000 hospitalisations per day, and an estimate of 10 times that amount self-isolating at home with mild or asymptomatic cases. The government says this ban on public assembly is necessary to rein in those numbers.

Some gatherings will still be allowed, with police notification at least 24 hours in advance of the event and following all the guidelines laid out in the Public Assembly Act. Bangkok Governor Chadchart Sittipunt had previously set seven specific locations where gatherings could be held, provided security preparations were made with the district office 24 hours in advance.

Manu
Quote Rights groups and pro-democracy activists who had been consistently rallying in the streets against the government see this as a way to prevent them from protesting. Quote While 53.5 million people have been vaccinated (31 million with booster shots…
Pompies
This is only the beginning. As the supposed election date approaches these measures will be applied across more locations across the country and the state of emergency will be expanded. Do not be surprised to see curfews return and there…
gazmo16
As we all suspected the Emergency Decree was extended for this very purpose and had nothing to do with the lingering Covid despite what the PM keeps spouting.
Janneman
Good. This ban might also help to stop the spread of monkeypox. Or any other disease we havent heard of yet.

DesperateOldHand
1 hour ago, Pompies said: This is only the beginning. As the supposed election date approaches these measures will be applied across more locations across the country and the state of emergency will be expanded. Do not be surprised to…