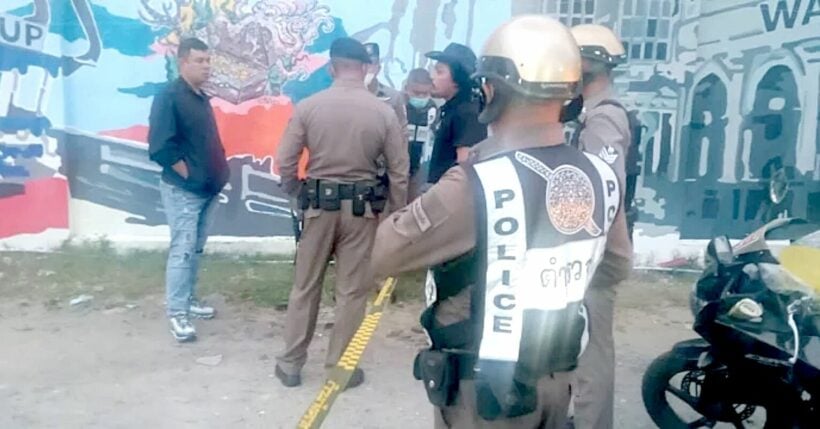 PHOTO: The security guard who shot a sword-wielding customer is being charged with murder. (via Eakkapop Thongtub)

After intervening in a scuffle between a man and a woman outside a Phuket Town bar, the man grabbed a sword and a security guard shot him once in the chest, killing him. Now the guard is being charged with murder in the incident.

The altercation took place in the early hours of Monday morning when a man was fighting with a woman outside of a karaoke bar and the security guard stepped in to try to resolve the issue. The enraged man went to his white pickup truck in the parking lot and grabbed a sword from his car. The 35 year old security guard pulled out a gun and fired once, shooting the angry man in the chest, resulting in the murder charge. The man’s body was found lying next to his pickup truck surrounded by one used bullet casing, and a sword with a blade that was about half a metre long.

It appears that after the pub closed, two customers, a man, and a woman, were fighting outside of the bar around 5am while security guards were still finishing up their shift. It is unclear if the man pulled out the long blade to threaten or attack the woman or in response to the security guard trying to break up the fight. One report says the man was moving toward the woman with the knife when the guard shot him.

The security guard immediately surrendered himself to the Phuket City Police on the scene and handed over the Glock 9mm handgun he had fired. It was legally registered and was given to police along with 14 bullets.

Nevertheless, the guard is being charged with several counts in the incident, including murder, plus carrying a gun, and opening fire in public without permission. While the gun was legally owned, he did not have an open carry permit or a concealed carry permit.

The security guard says the man was harassing female customers and that he had received several complaints about it, so he was doing his job and intervening. But when the man fetched a sword and threatened with it, he responded by drawing his gun and firing once, killing the man.

The guard plans to fight the murder charges, saying that he had acted in self-defence in the incident against the sword-wielding patron. He remains in custody now and will appear in court regarding the charges.

longwood50
3 hours ago, Tim_Melb said: I don't know what you think you are saying or doing by quoting my quote from another poster and attributing it to me and then attacking me when I have only said basically the same…
Tim_Melb
23 hours ago, longwood50 said: No what you said was " I think it largely depends on the shooter's training level."    No I never said that I quoted another member "Dimitrii" saying that, try reading the posts properly before attacking…
garyknrd
Man, Alcohol will make you do some stupid Shi$$.