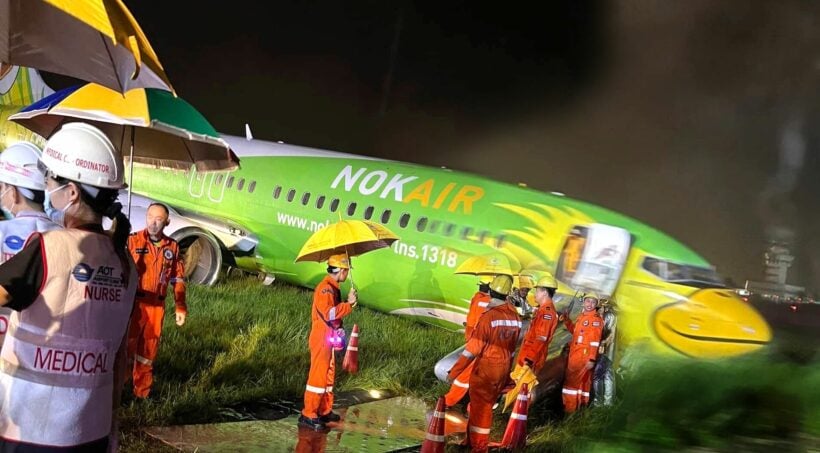 The Nok Air plane that skidded off the runway in Chiang Rai on Saturday night, August 1, still hasn’t been removed. Mae Fah Luang Airport in northern Thailand announced that the airport will remain closed for two more days and plans to reopen on Friday, August 5, at 10pm.

The airport announced the suspension of all flights in and out of the airport on Sunday morning after Nok Air flight DD108 from Bangkok came off the runway during landing and got stuck in the mud on Saturday night at around 9pm.

On Sunday, the airport announced flights would resume at 10pm that day. Later on, the airport released another statement saying the airport would need to be closed for three days because a crane and other equipment was needed to lift the aircraft out of the mud and tow it away. The airport would reopen on Wednesday, August 3, at 10pm, they said.

Last night, August 2, the Airports of Thailand and Chiang Rai Airport released a joint statement to announce that flights would not be resuming on August 3 as planned. The statement said the airport needs two more days to get the Boeing 737-800 away from the side of the runway. Flights will resume on Friday at 10pm.

The Civil Aviation Authority of Thailand – or CAAT – classed the incident as “severe.” Despite the requirement of cabin crews to evacuate “crashed” planes in 90 seconds, the 164 passengers on board were kept on board for more than one hour, sparking outrage among passengers and the public. The engine was turned off and passengers were stuck inside the hot plane with no lights or air conditioning, according to one passenger’s complaint.

Nok Air released a statement explaining that the poorly executed evacuation was due to the cabin crew following the “highest safety procedures.”

The incident has caused major disruption to travel. Mae Fah Luang Airport has a single runway, meaning no flights are coming in or out for a duration of (at least) six days. The airport usually sees 36 flights take off every day, facilitating a daily average of 4500 – 5000 passengers.

AdvocatusDiaboli
3 hours ago, Thaiger said: The Nok Air plane that skidded off the runway in Chiang Rai on Saturday night, August 1, still hasn’t been removed. They are still waiting to remove the passengers …. Quoting safety reasons, but expect…