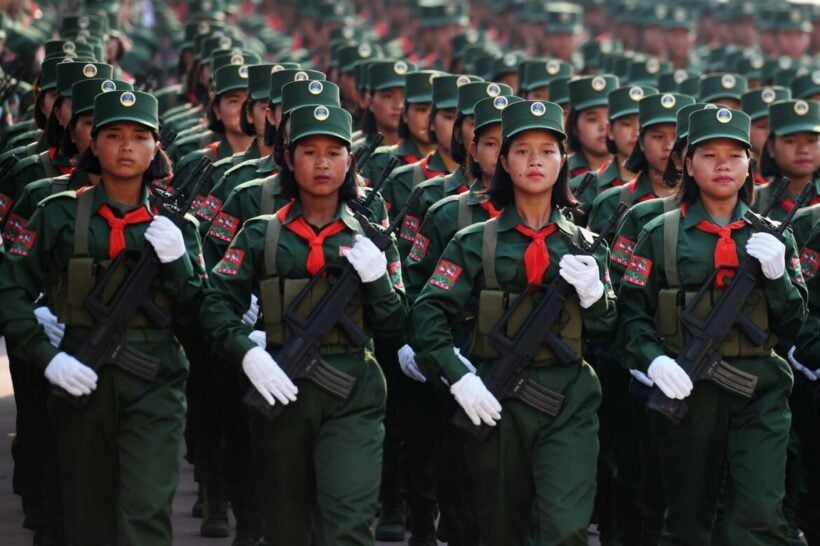 US authorities revealed yesterday that they have arrested three Thai men and a Japanese yakuza organised crime leader in New York City on April 4 – 5. The men are accused of trafficking heroin and methamphetamine, as well as attempting to acquire surface-to-air missiles for rebel groups in Myanmar and Sri Lanka.

Takeshi Ebizawa, Sompak Raksaranee, Somphop Sigsiri and Suksan Chulanan were arrested on drug and arms trafficking and money laundering charges, according to the US Department of Justice. The men have been under investigation by US Drug Enforcement Administration agents in Thailand since 2019 since they attempted to sell an undercover agent large quantities of heroin and methamphetamine from Myanmar’s rebel group the United Wa State Army, or UWSA.

Japanese yakuza leader Takeshi Ebizawa planned to buy automatic weapons, rockets, machine guns and surface-to-air missiles and supply them to various rebel groups. Ebizawa planned to supply weapons to the UWSA and the Karen National Union and Shan State Army, which are ethnic minority forces resisting Myanmar’s government forces. He also planned to supply weapons to Sri Lanka’s militant organisation the Liberation Tigers of Tamil Eelam. The three Thai men were his co-conspirators in the operation.

In February, an undercover DEA agent and two Danish undercover police officers showed Ebizawa and an associate a variety of US military weapons including machine guns and anti-tank rockets in Copenhagen. The yakuza leader made deals with the undercover officers to buy heavy-duty weaponry destined for rebel groups in East Asia. Ebizawa also made deals to buy large quantities of drugs, which he planned to sell in New York City.

The US Department of Justice say that Ebizawa is “a leader of the yakuza transnational organised crime syndicate”. Yakuza is the name given to the international Japanese mafia.

Ebizawa told the undercover agents that Suksan, a Thai-American dual citizen, was a Thai air force general and that Thai native Sompak was a retired Thai military officer. It is unclear how the four men ended up in the United States.

Raugh
Takeshi Ebizawa - he's like some sci-fi RPG character from blade runner or what have you "Yakuza boss tried to buy surface-to-air missiles stolen from military base in Afghanistan: NYC feds" Is it just me or does this sound like…

palooka
was a Thai air force general and that Thai native Sompak was a retired Thai military officer Obviously nothing has changed in their working life since retirement from the Thai Military.

palooka
They probably learnt how to do this from the CIA who were shipping planes loads to America during the Vietnam War, drugs one way, arms the other way. Probably why they were busted no CIA involvement.