As the Covid-19 pandemic sweeps the world, some countries are faring better than others. Hong Kong, Taiwan, South Korea, and as late as March, Singapore, had all been hailed for using the hard-won lessons of the 2003-04 SARS outbreak to combat the new virus, a relative of SARS.

For Singapore, Taiwan and Hong Kong, the story might well have been one of immense tragedy, the timing was bad. The virus emerged just before the Chinese New Year, when millions travel on home visits across the region in the world’s largest annual human migration. All three territories are closely interconnected with mainland China, where the outbreak began, and all 3 began aggressive measures to contain the spread.

But things are different now. Singapore’s confirmed cases have blown past 10,000 from just 1,000 at the beginning of this month and as of this morning stood at 11,178 and rising, the highest number in south east Asia. The city state is regularly posting over 1,000 new cases per day, the vast majority among its estimated 320,000 migrant workers living in cramped conditions. Almost 80% of new infections are linked to migrant workers living in 43 mega-dormitories across the country.

On Tuesday this week, Singapore said it would stop the daily movements of workers in and out of all dormitories, including those that are purpose built, factory-owned or temporary quarters for construction workers. Workers in essential services, who’ve tested negative, have been moved to other accommodations. The rest will remain in virtual concentration camps, where the risk of infection has been evaluated as “extremely high”. 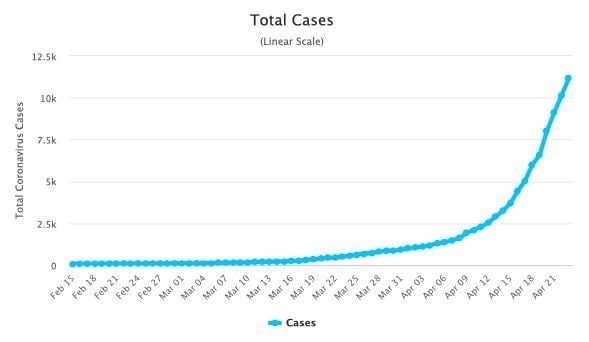 The pandemic exposes the gross inequality in Singapore, which relies heavily on a workforce of about a million migrant workers to build the country’s shiny skyscrapers and clean its sprawling shopping malls. Most of the migrant workers come from Bangladesh, India and other South Asian countries hoping of sending money back home. Their lifestyles are in stark contrast to the country’s wealthy elites and financial workers and live in separate communities and remote villages, away from the tourist areas and busy shopping malls.

A video report from the BBC.