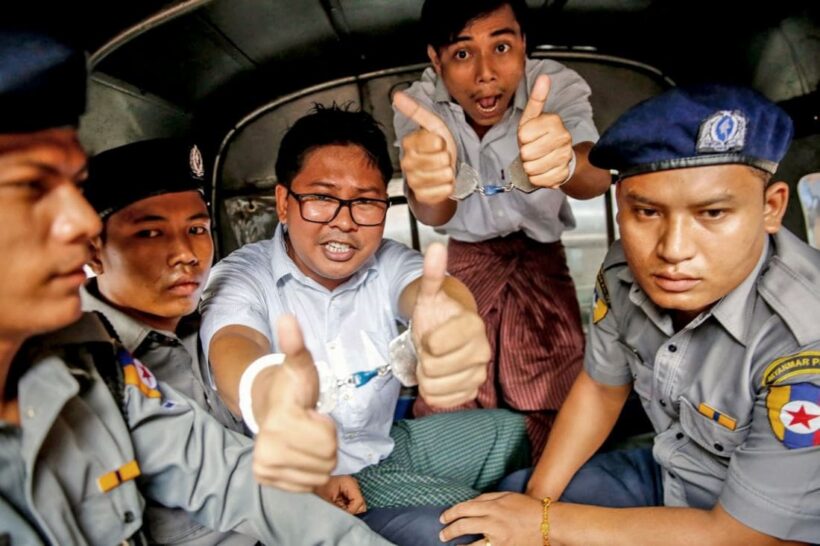 A Myanmar court has rejected the appeal of two Reuters reporters sentenced to seven years in jail on charges of breaking the Official Secrets Act, saying the defence had not provided sufficient evidence to show they were innocent.

32 year old Wa Lone and 28 year old Kyaw Soe Oo were convicted by a lower court in September in a landmark case that has raised questions about Myanmar’s progress towards democracy and sparked an outcry from diplomats and human rights advocates.

“It was a suitable punishment,” said High Court Judge Aung Naing, referring to the seven-year prison term meted out by the lower court.

The pair may still appeal the country’s Supreme Court.

Read The Thaiger’s full report about their failed appeal HERE.

Here’s the report that landed them in jail. Please read and share…

“Bound together, the 10 Rohingya Muslim captives watched their Buddhist neighbors dig a shallow grave. Soon afterwards, on the morning of Sept. 2, all 10 lay dead. At least two were hacked to death by Buddhist villagers. The rest were shot by Myanmar troops, two of the gravediggers said.

“One grave for 10 people,” said Soe Chay, 55, a retired soldier from Inn Din’s Rakhine Buddhist community who said he helped dig the pit and saw the killings. The soldiers shot each man two or three times, he said.

“When they were being buried, some were still making noises. Others were already dead.”