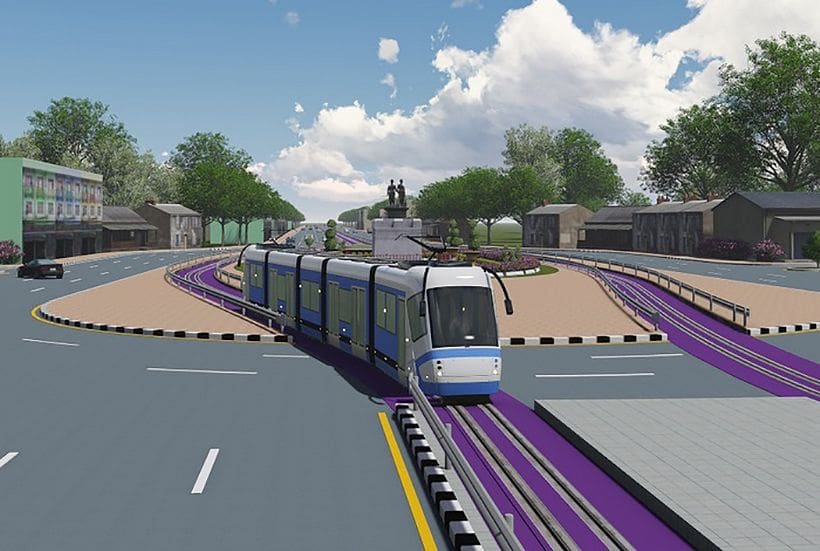 “About the only thing feasible in this rendering is the blue sky.”

Spending 35 billion baht on infrastructure that few will use, is planned on the least useful route and will cause mayhem for a 3-5 year build time is a waste of money.

Firstly, where will it travel?

The tram route plans to run from Tha Noon in Phang Nga province, across Sarasin Bridge onto Phuket, past the airport, through Phuket Town on the east coast and then finishing at Chalong’s main intersection near the Chalong Circle.

Phuket’s tourists, who mainly head for the west coast beaches, are being almost completely ignored in the planning.

Oh, but the tram will travel from the airport to Phuket Town (where less than 5% of Phuket’s tourists stay). That route is already well connected with Airport and private buses – the least of Phuket’s transport woes.

The two-way tram will be constructed right in the middle of existing, already busy, roads – principally Thepkasattri road from the island’s north to Phuket Town. Then in the middle of the equally busy Chao Fah East road which, mostly, doesn’t already have a centre-strip.

The MRTA expects to seek cabinet approval for the project in the middle of this year with construction likely to begin in 2020. They estimate it will be operational by 2023 (code for ‘maybe before 2025’).

At this stage, the MRTA estimates fares will be no more than 100 – 137 baht, less for shorter hops between the 21 proposed stations. This already puts the cost of daily use for many local Thais out of reach. If it costs about 80 baht to fill an average 110cc scooter which would last most of the week – you do the maths.

Then the locals will still have to use public transport, or their feet, to get to and from the nearest tram stop.

Here are four key problems with the whole idea…

The tram stops avoid most of the tourist hot spots along the west coast of the island and concentrates on locals living along the main Thepkasattri trunk from Thalang to Phuket Town and then Chao Fah East to Chalong.

Patong? Kata? Karon? Surin? Mai Khao? Kamala? Nowhere near them. We acknowledge that a tram would never be a solution to get to people to and between these locations.

The second point is a glaring failure in the concept to measure popular and cheap services currently available – mostly the trusty and cheap motorbike.

Thai users are unlikely to give up their point-to-point motorcycle transport for a more inconvenient, and expensive, tram that will necessitate them using expensive taxis, buses and motorcycle taxis at either end to get them to their destinations.

Next, imagine the three year construction period which, if following recent major road construction projects, is likely to blow out to four or five years. And the massive disruption of traffic during the construction time. Ask anyone living in Chalong and Rawai about how the roadworks at the Chalong circle has affected their lives in the past three years. It’s been chaotic, time-wasting, dangerous and stressful.

Finally, the loss of road space along the route will restrict local road traffic even more, neutralising any nett gains of the new tram system. Tram rails, in both directions, 21 stations, the overhead walkways (to get people to the sidewalk areas), parking… where is all this going to go? It will chew up limited road space and bring traffic and people even closer together – a recipe for disaster.

But this new white elephant completely ignores the real elephant in the room – the intransigent cabal of the taxis and tuk tuks on the island which ‘could’ be the island’s best asset. But instead they are a feared, reviled and a much-discussed tourism killer.

Local people almost completely avoid taxis and tuk tuks (they already know their fares are ridiculously priced when compared to other parts of the country), and tourists use them because there’s not a lot of alternative only to end up with occasional horror stories in social media, complaints to the Tourist Police and a lasting impression of Phuket as an over-priced tourism pearl that’s lost its lustre.

Spending 35 billion baht (let’s spell that out for you – 35,000,000,000 baht) on a shiny new tram system does little, if nothing, to address the island’s key transport issues – better roads and better alternatives for transport in and around tourist zones. 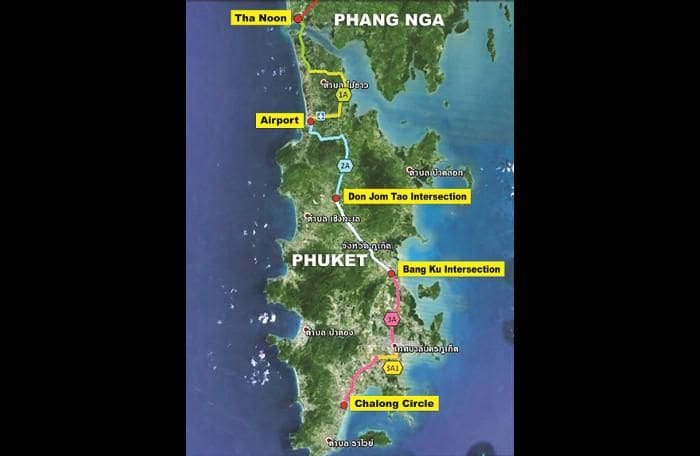