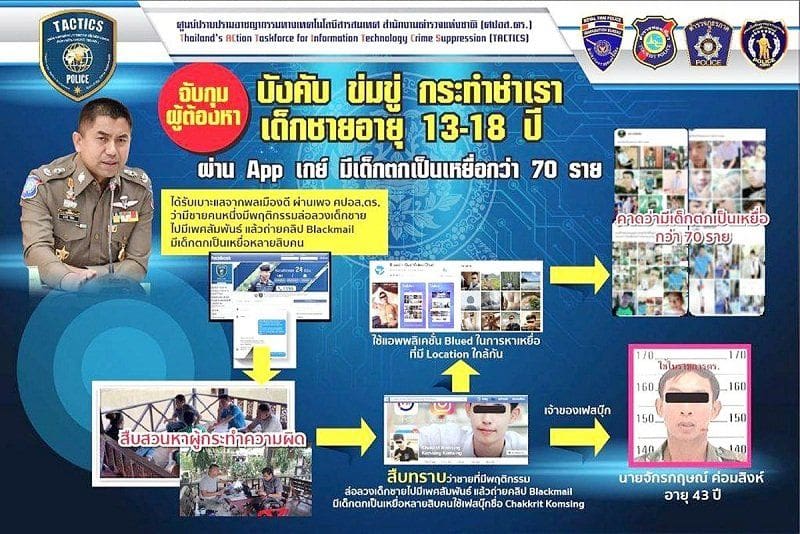 A 43 year old former Thai soldier has been arrested for raping 75 boys, many of whom were aged under 15 at the time of the alleged crimes.

It is claimed he lured his victims by using the photo of a handsome younger man as his own profile picture in a gay chat application and then Facebook. Authorities are now trying to provide remedial measures for the victims and are urging anyone else who might have been a victim of the man to file complaints with police.

Former Master Sergeant Chakkrit Komsing, living with HIV, allegedly used obscene pictures sent to him by the boys to coerce them into meeting him. He is accused of then also recording the attacks on video for the purposes of blackmail, according to acting Immigration Bureau chief Pol Maj-General Surachate Hakpal in his capacity as deputy director of the National Technology and IT Crime Suppression Centre.

Using the man’s own notes about the attacks, police counted a total of 75 victims, 28 of whom were aged 13-18 and were clearly identified with names and home addresses in Khon Kaen, Udon Thani, Kalasin and Maha Sarakham.

Police are now working with various authorities to locate and help the victims, he said, urging more victims and parents to step forward and offer information that might be relevant to the inquiry.

The 14 year old boy who filed the first complaint claimed that he had met a military man after first chatting with him online.

The boy said he tried to leave because the man was clearly not the youth he had seen in the man’s Facebook profile photo, whereupon Chakkrit allegedly threatened to release the boy’s obscene pictures online and raped him in the car.

Surachate said police had established that Chakkri had been diagnosed as HIV-positive in 2009, began treatment in 2015 and started working at the Khon Kaen military camp just eight months ago.

Deputy army spokeswoman Colonel Sirichan Ngathong said the army had handed the suspect over to police to let justice run its course as this was a case of individual wrongdoing.

She said Chakkrit was now in the custody of Khon Kaen’s Nam Pong Police and that Chakkrit’s former supervising agency – which has also set up a fact-finding committee into this allegation to run in parallel with the police probe – would co-operate with the police investigation and would ensure justice to both the accused soldier and his alleged victims.

She said if the soldier were found guilty as accused, he would face both disciplinary and criminal code punishments.