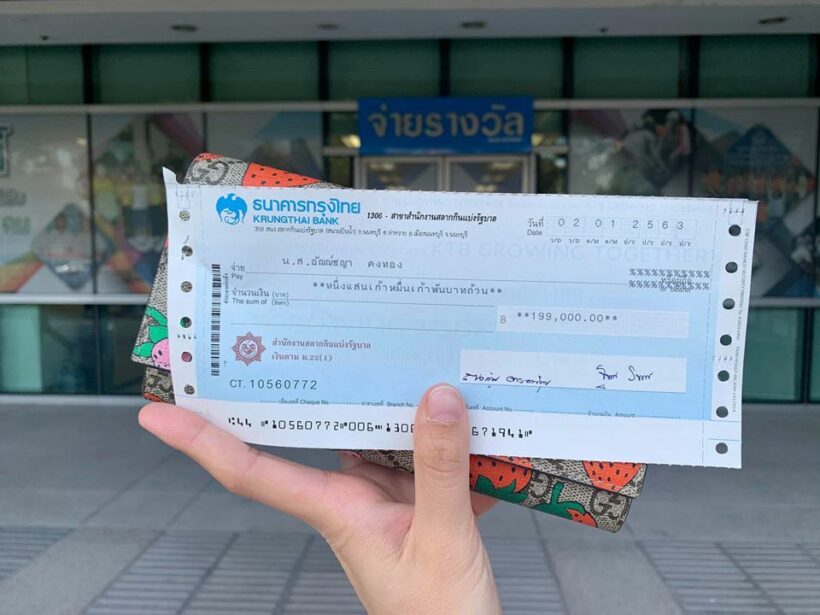 A waitress from Ban Sabah Village in Lampang rovince won 12 million baht in yesterday’s national lottery by pure luck, after she couldn’t a ticket with her license plate number. The woman says she initially knew the exact number that she wanted to buy, but as there were no tickets with the number, the vendor gave her two random tickets. She was shocked when she realised the big win, but insists she’ll continue living a normal lifestyle.

Thai news site Khaosod News got notification yesterday that someone had won the lottery, with a jackpot of 12 million baht. The woman, as it turns out, is a 50 year old waitress from Ban Sabah Village in Lampang Province in Thailand’s north, near Chiang Mai. She says that just a day before the official draw date she was working as usual in the restaurant. A lottery vendor came in and offered to sell her lottery tickets.

After the lottery numbers were announced, Ladda realized that she had 2 tickets and was shocked as she was holding the not one, but two. Coworkers and neighbors came to congratulate her when they heard the news. Ladda says she will be using the money to pay off her debt and the rest will be kept in a bank. She says she wants to continue working as usual in the restaurant and continue her simple lifestyle.

At first, Ladda says, she tried to find a ticket with numbers from her license plate. The vendor saw that she couldn’t find the numbers she wanted and so handed her 2 tickets with the number 446. A single winning ticket in the government lottery carries a grand prize of 6 million baht; Ladda’s two wining tickets, worth 12 million baht, should be enough to provide a comfortable life going forward.