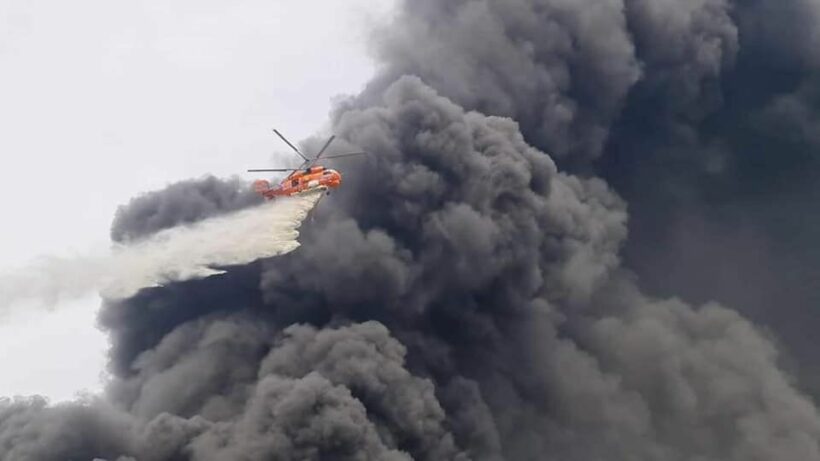 LATEST: Around midnight this morning, the Samut Prakan Governor, Wanchai Kongkasem, informed a news conference that firefighters had closed off 3 valves on tanks that stored chemicals. Thus, flames had been put out and the walls of dense black smoke were reduced.

Wanchai said that the valves being closed cut off the fuel to the fire. Which also reduced the risk of further explosions.

However, within 30 minutes of Wanchai’s announcement, officials at the scene of the inferno said the flames had regrouped and were raging hard again and heading toward the fuel tank. The blackout curtain of smoke again fell. Firefighters and other officials were forced to flee. Further explosions were heard.

Then, around 1 am, the fire pushed the human forces back again as all rescue workers from the Ruamkatanyu Foundation were ordered to evacuate post haste.

However, 3 hours later, firefighters wrestled control of the situation.

Currently, damages estimates are in the ballpark of 700 million baht. 177 people have sent complaints with the Bang Kaeo police requesting compensation from the plastics company due to property damage sustained during the fire, says Wanchai.

The U.S. Embassy in Bangkok extended its condolences on Facebook.

YESTERDAY’S UPDATE: A rescue foundation firefighter was killed and more than 60 people were in the fire at a chemical factory in Samut Prakan, just outside Bangkok. The Ming Dih Chemical Co factory exploded overnight, sending black toxic smoke into the air.

Helicopters were deployed to the scene to spray flame retardant foam. By this evening, the fumes were headed toward Bangkok. People who live in a 5-kilometre radius near the factory were told to evacuate as a precaution.

Reports in Thai media say the rescue volunteer who died in the fire was 18 year old Kornsith Laophan.

This morning a plastics factory exploded in Samut Prakan, a province just south of Bangkok. There were many injuries reported.

The Ming Dih polystyrene factory caught fire around 3 am. Witnesses report hearing multiple explosions in the area. 10 people were injured and 2 were seriously injured. It was also reported that a huge fireball erupted from the factory. 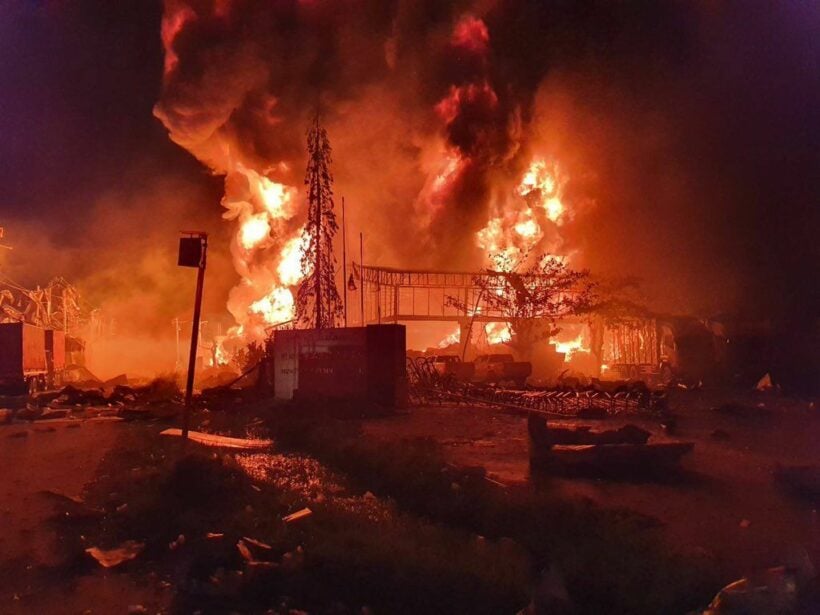 It took firefighters 2 hours to put out the fire. Around 9:30 am, the Department of Disaster Prevention and Mitigation and Bang Phli district chief Somsak Kaewsena told people who live in a 5 kilometre radius to evacuate. Residents have also been cautioned against inhaling the smoke.

An investigation into the fire that turned the factory into a scene from a post-apocalyptic movie is ongoing. Bomber
I used to be a process operator and trained industraial fighterfighter in the chemical  and oil industry for 19 years. Brings a tear to my eyes seeing all those poor fighterfighers with out the proper personal protective equipment on. May god…