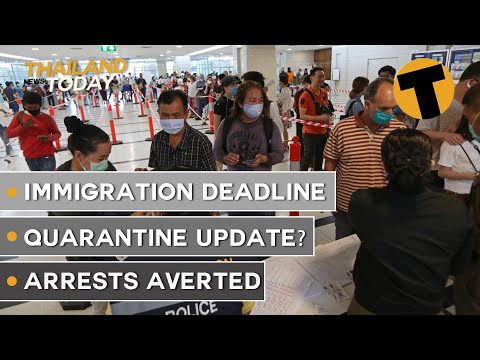 Last day of the week and all the main stories from around Thailand. Thailand News Today, a bit late today but here it is…

The latest amnesty is up tomorrow (October 31) and some immigration offices will be open for those who still need sort out their visa extensions.

Those who miss the deadline could face fines for overstay, immigration officials warn. The extensions all go into effect from November 1 and allow a 60 day stay.

A bid to apprehend 5 anti-government activists who led a march to the Germany Embassy on Monday has failed, after a court in Bangkok rejected a police application for arrest warrants.

The Bangkok South Criminal Court has turned down the application for arrest warrants.

The 5 would have faced charges of sedition and other offences. But the court told officials to instead issue a summons, given that the protesters are students who only gathered for a short time and are unlikely to flee.

On Monday, protesters marched to the German Embassy to submit a petition calling on the country’s government to investigate whether Thailand’s Head of State conducted official business while in Germany. Which nicely segues to the next story…

The German government does not believe the Thai Monarch broke the law on conducting state affairs during his time in the German state of Bavaria.

Germany says His Majesty the King has not violated the European country’s ban on conducting foreign politics on German soil where he resides. The government in Berlin briefed lawmakers this week, saying the Thai Monarch is allowed make occasional decisions regarding Thai state affairs, but he cannot continuously conduct business from overseas.

So far, the German government says they do not believe the King Maha Vajiralongkorn “continuously” conducted Thailand state business during his residence in Bavaria.

PM Prayut Chan-o-cha is heading to Phuket on Monday, where he will meet with local business leaders and discuss proposals to help revive the southern island’s devastated tourism sector.

Despite Phuket Models and any number of promises from the Thai tourism sector, Phuket remains in a perilous situation whilst the government keeps its borders closed. Almost 100% of Phuket’s economy is derived directly or indirectly from tourist traffic.

Health officials are suggesting cutting mandatory quarantine for international arrivals to 10 days. We’ve heard it all before but the idea has risen to the top of the Health Minister’s file again.

Health Minister Anutin Charnvirakul says the proposal will be submitted to the CCSA for approval. It’s hoped that a reduction in the quarantine period could help revive Thailand’s battered tourism sector. Only a tiny handful of STV tourists have arrived on the the tourist visa over the past month. The health minister said…

”The priority now is to strike a balance between people’s health and the economy. Thailand still has to rely on foreign tourists. Re-opening the country to foreign visitors will help put the economy back on track.”

The Minister didn’t say where all these tourists might come from or speculate when a reduction on the quarantine period might be introduced.

Police have arrested a woman for allegedly selling and fitting fashion dental retainers and braces.

The woman has allegedly been selling the retainers on a Facebook page under the name since November 2017, targeting mostly teenage students.

In Thailand, braces and retainers are a fashion trend and also seen as a symbol of wealth. The Thaiger suggests that if you want a set of straight teeth, go to an orthodontist.

Floods in NE Thailand as Vietnam mops up after typhoon

Flooding persists in four north eastern provinces, including Nakhon Rachasima as of this morning. All in the wake of the weakening tropical depression that crossed the Vietnamese coast on Wednesday as Typhoon Molave.

‘Molave’ was the most powerful typhoon to hit Vietnam in 20 years. The remnants of the tropical depression are now centred over the west of Thailand where it continues to drop plenty of rain.

At least 35 people are dead, 100s injured, and 50+ missing in Vietnam as disaster mitigation authorities are now reaching some of the worst hit areas in central Vietnam.