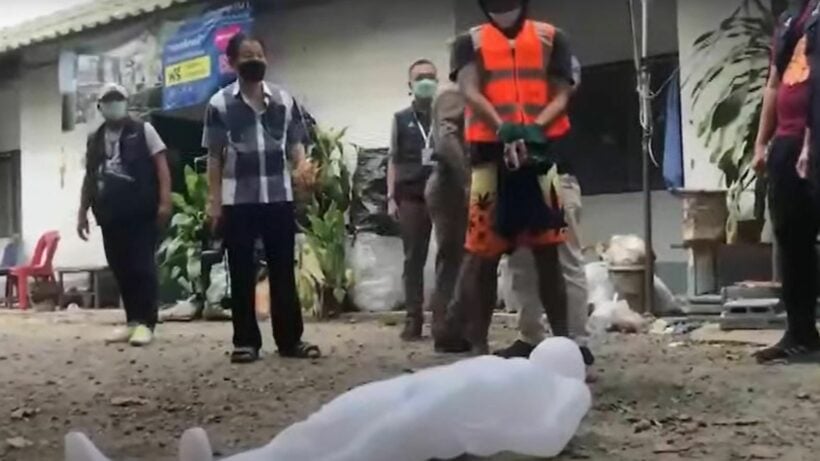 A man has been arrested for allegedly killing another man with a hand truck in Chon Buri, a province on the Gulf of Thailand, for staring at him. The 34 year old suspect, Wisathorn Tawanna, has been charged with murder after he allegedly beat 42 year old Sawasdee Moonta to death with a handcart. Wisathorn has allegedly confessed to the murder and performed a reenactment of the incident, yesterday. The alleged murder took place last Saturday.

Police Chief Colonel Nitat Weanpradap says Wisathorn had argued with the victim, Sawasdee, in front of a rental room because Sawasdee had stared at him and this wasn’t to Wisathorn’s liking and a confrontation ensued. In the struggle, Sawasdee tried to defend himself with a knife he had, but Wisathorn overwhelmed him with a hand truck that was near the rental room. Sawasdee would later be pronounced dead at the scene. Wisathorn fled the scene, but police managed to find him with the help of nearby CCTV, says Nitat.

“Sawasdee was staring at me and making me uncomfortable, leading to an argument. I didn’t intend to kill him and meant to use the hand truck to defend myself as he also had a knife”, Wisathorn allegedly says.

Nitat adds that police suspect that even though Sawasdee had a knife, Wisathorn was the one who instigated the fatal encounter.