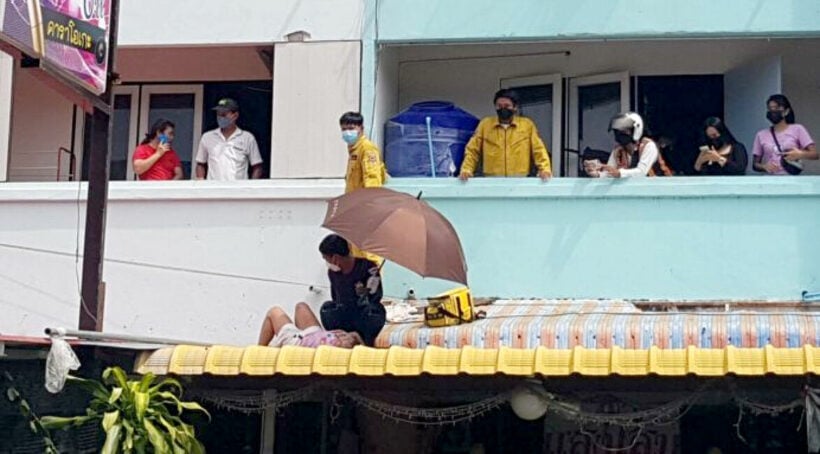 PHOTO: A Laotian woman falls during a climb to her friend's apartment. (via Wisarn Sangjaroen)

A Laotian woman in Chon Buri was hospitalised with 2 broken arms after attempting to climb across a balcony from her third-story apartment to her friend’s room next door and falling. The 43 year old woman plummeted from the third story, but her fall was broken by an awning on the first floor.

The incident took place in an apartment building in Baan Suan at Mueang Chon Buri on Wednesday in the early afternoon. Local police were called to the scene along with emergency responders to find the Laotian woman sprawled on the awning on the first floor of the building. Both of her arms were broken and emergency responders transported her to the local hospital for further treatment.

The first responders said that the awning she landed on helped break her fall and may have possibly saved her life. Falling off buildings is a startlingly frequent occurrence in Chon Buri for some reason.

Witnesses saw the woman attempting to swing across the balcony in order to reach her friend’s room in the next building over. Residents in the apartment building saw her climbing, and the woman admitted to emergency responders that she does this climb on a daily basis.

The woman explained that, even though her friend’s window was so conveniently located just across from hers, the actual way to get to her friend’s apartment would require her to go down a few flights of stairs to the ground floor to access a separate entrance where she would then have to climb up a different flight of stairs to reach her friend’s room.

She told rescue workers she was “too lazy” for that effort each day, so she usually just climbs across the balcony to visit her friend. This time, however, she slipped and lost her balance and plunged to the awning below. In the hospital, the Laotian woman is reported to have told police that she has learned her lesson and might take the double flights of stairs to see her friend in the future.

Saunk
People falling from buildings is such a common place in Thailand.