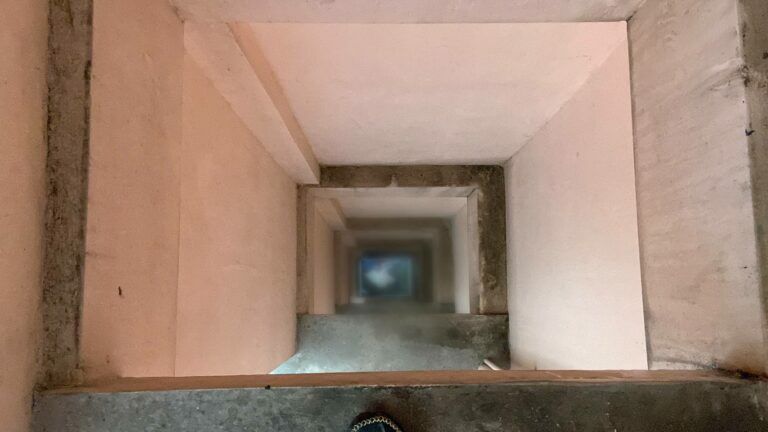 PHOTO: A Chon Buri drunk man falls 7 floors to his death down a garbage chute. (via Wisarn Sangjaroen)

A Thai man was found dead after police believe he was very drunk and attempting to vomit down a garbage chute on the 7th floor of a Chon Buri apartment complex and fell into it to his death. The accident took place this week in Mueang Chon Buri Nong Maidang district and the Don Hualor Police received notification of the incident.

The dead man was found at the bottom of the chute, but his shoes, along with some vomit, were found near the garbage chute 7 stories above. The caretaker of the apartment complex confirmed that the man lived on the 7th floor of the building.

Police are conducting a full investigation in order to determine the exact cause of death, but they reported that they have not found any sign of a struggle or altercation and don’t suspect any foul play so far. CCTV footage is reported to have confirmed that the man seemed to be heavily intoxicated before the accident.

It is believed that the man was so drunk that he was attempting to throw up down the garbage shoot and lost his balance, plummeting 7 stories to the ground below.

Pattaya seems to have an unusual amount of people falling to their deaths from aparments and condos. Just last week a foreign teenager fell 14 floors to his death.

Bluesofa
1 hour ago, Dedinbed said: Chute to kill then ..  Anyone else would have said 'shoot' That must have been Sean Connery speaking.

ThailandBob
Dying by falling into a trash chute wasn't even on my radar!🤔 This was a real wake-up call.

Dedinbed
16 minutes ago, Bluesofa said: Anyone else would have said 'shoot' That must have been Sean Connery speaking. Snaken and not slurred you mean ..  as my ex-bird use to say ..
JackMeOff
Cause of death? I think it was the sudden stop. Either that or check to see if there was a plastic bag around his head

PapayaBokBok
Geez lots of trash talking on this thread.....certainly made it easier for the cremation..RIP mate.