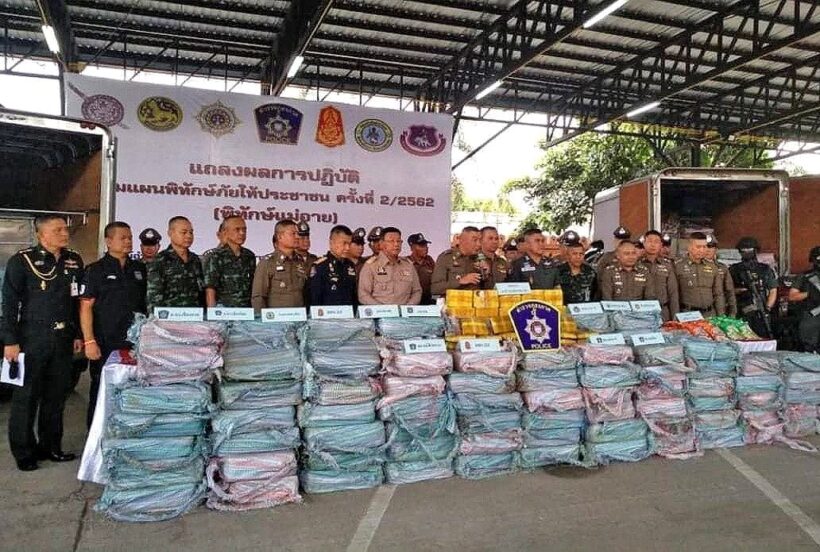 Police have arrested six men and seized 15 million methamphetamine pills they were allegedly trying to smuggle from Chiang Mai to Bangkok in four pickup trucks.

The arrests were made between 8.30am and 3pm on Monday in four separate incidents at two checkpoints, on a road and at a resort in Mae Ai district in Chiang Mai, and further north in Chiang Rai’s Mae Chan district.

The Nation reports that police say the six suspects were all aged between 22 and 54.

The drama began when Mae Chan police at a road checkpoint spotted four empty pickups driving in convoy and became suspicious. They stopped one of the pickups and checked but found nothing untoward.

The driver told them he was driving to Mae Ai, so police alerted the Mae Ai and Mae Chan stations to check the pickups when they arrived.

One pickup turned up at the Huan Nua resort in Mae Chan, where police stopped it and tested the two occupants for drugs. Both tested positive and were arrested. They told police they were hired to smuggle the drugs from Mae Ai to Bangkok.

Police on the Mae Chan-Fang road in Mae Ai then spotted another of the suspicious vehicles and flagged it down. Hidden under a pile of blankets in the back they found 48 bags containing a total 4.8 million methamphetamine pills. The occupants of the vehicle were taken into custody.

More rain until this Friday – parts of Krabi flooded