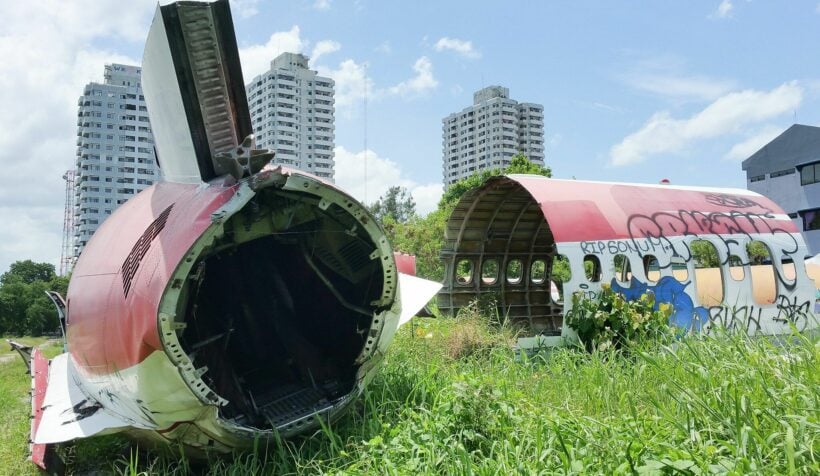 Bangkok’s famous “Airplane Graveyard” caught fire yesterday evening. Firefighters believe blaze first started in dry grass nearby before spreading to one of the decommissioned planes. People living nearby reported thick black smoke and strong chemical smells coming from the junkyard, which is home to an abandoned Boeing 747 plane and 2 McDonnell Douglas MD-82 aircraft.

Fire crews were called at 9pm and brought the fire under control around 10:15pm. The Hua Mark Fire and Rescue station said the flames weren’t very dangerous, as they weren’t near any buildings and were contained within 100 square metres. But the noxious chemical smells coming from the burning jet “were concerning”.

The cause of the fire is under investigation and has not yet been determined yet.

The 3 abandoned planes, now in graffiti-covered states of decay, are featured on many blogs for urban exploration. It started when the nose of a 747 was dumped in an empty field off of Ramkhamhaeng Road in 2010.

In 2014, 2 McDonnell Douglas planes that belonged to One-Two-Go Airlines were dumped there too. The model was involved in a fatal crash in 2007 at Phuket International Airport. The company was banned in the EU in 2009 and 2010 over safety worries before reforming as Orient Thai Airlines with a new fleet of airplanes.

In 2015 a full 747 was added to the Airplane Graveyard, and homeless people turned the fuselages into makeshift housing. Some even charged tourists admission of between 200 and 800 baht to photograph and explore the area’s broken planes.