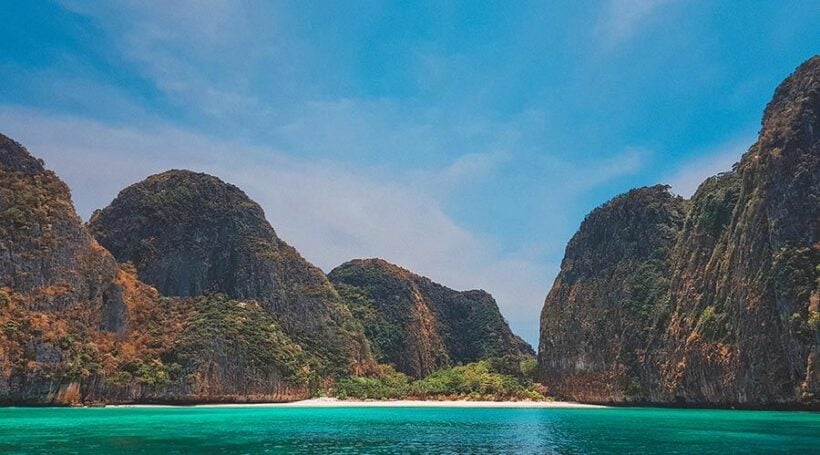 The government is considering re-opening Maya Bay in 2021, although things are not expected to return to how they once were, with the famous beach overrun by out-of-control tourist numbers each day. Nation Thailand reports that a panel of environmental experts will be consulted on a possible re-opening of the bay, made famous in 2000 with the release of the Leonard di Caprio movie, “The Beach”.

Maya Bay, on the uninhabited island of Phi Phi Leh, in Krabi province, has been closed since mid 2018, when it became apparent that mass tourism on an unprecedented scale was trampling the beach and destroying marine life. Since then, the waters around the island have begun to flourish once more, with black-tip reef sharks and other marine life regularly seen in the bay.

At its peak some 4,000 – 5,000 tourists were visiting Maya Bay every day. And the tour boats were allowed close to the beach, throwing out their anchors and destroying the coral.

Despite the efforts to re-open the famous landmark to visitors again, the feeder markets of Phuket and Krabi are currently almost devoid of any tourists, apart from a handful of domestic visitors, until Thailand’s borders are more generally re-opened for tourism. Koh Phi Phi Leh is situated between both Krabi and Phuket.

Warawut Silpa-Archa, the Minister for Natural Resources and the Environment, says that while the bay could re-open next year, as officials attempt to kick-start a tourism industry decimated by Covid-19, strict conditions will apply. It’s understood a committee of marine and environmental experts will be involved in the decision, with plans to limit daily visitors to a maximum of 350 and to prohibit boats from dropping anchor near the shoreline. Currently boats are not allowed to enter the bay at all with the beach totally closed off from visits.

Meanwhile, Warawut is urging domestic tourists to visit Thailand’s other beauty spots, such as Koh Tapu in Phang Nga bay, also known as James Bond Island, after featuring in the 1974 spy thriller, The Man with the Golden Gun.