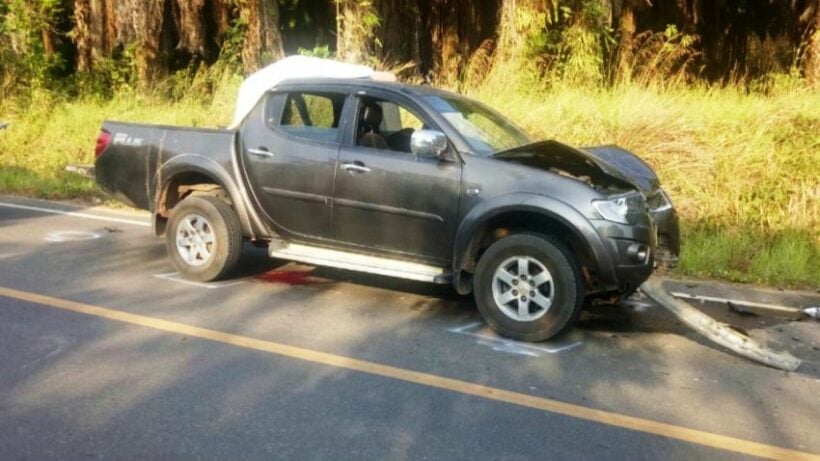 Two Austrian* tourists were killed in a collision with a truck in Thailand’s southern Krabi province on Monday. The pair were riding motorbikes registered in Krabi and veered into the wrong lane while navigating a turn on the road to Krabi Hot Springs when they collided head-on with an oncoming Mitsubishi pickup truck at approximately 4pm.

Police and rescue workers arrived at the scene at around 4:30pm to find a brown Mitsubishi pickup truck in the left lane with significant damage to its front. The motorbikes had also sustained serious damage. Both riders of the motorbikes were confirmed dead at the scene. Krabi police identified the two as 54 year old Michael Benk De and 53 year old Hei Delin De.

The 29 year old driver of the truck was at the scene and suffered no injuries. He told police he was returning to the resort where he works when the two motorbikes rounded the corner, veered into his lane and hit him head on. A third tourist, a friend of the couple, who was riding close behind but was not involved in the collision, confirmed the driver’s statement. PHOTO: One of the motorbikes involved in Monday’s crash – Chiang Rai Times

The pickup truck driver was tested for alcohol at the scene and police confirmed the result was negative, adding that they are unsure what charges, if any, the driver will face, as further investigations need to be conducted.

*The tourists killed in the accident were confirmed by the Tourist Police to be from Austria, not Australia, as earlier reported in local media.