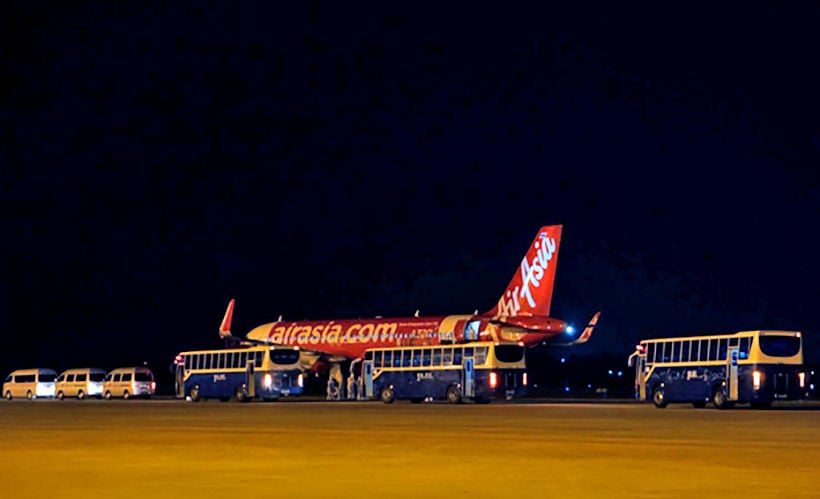 Four of the 138 Thais repatriated in an Air Asia jet from Wuhan last night were found to have a fever. The Thai Public Health Minister Anutin Charnvirakul was at U-tapao airport, south of Pattaya, last night to welcome the 138 evacuees. Thai AirAsia flight FD571, carrying the 138 Thai passengers, landed at the navy airport in Ban Chang district in Rayong at 8.40pm.

The flight was delayed as one Thai was unable to leave because they were discovered to have overstayed their visa, according to Khaosod English.

A medical team was flown to Wuhan to receive them. When they returned with the plane full of evacuees, and the four cases with ‘fever’, doctors speculated it could have been caused by anxiety, fatigue and dehydration.

The four have been isolated as a precaution and were taken to the Royal Thai Navy’s Sattahip base hospital for observation. The pilots and flight attendants, plus the 15 attending medics, also underwent complete checks to ensure they didn’t have any fever. They were all sprayed with disinfectant before being allowed to leave.

Minister Anutin announced that, if today’s test results show that the four repatriated Thais are clear of novel coronavirus, they will be discharged to join the others at special lodgings set up at the naval base. Anutin said they were all “in high spirits” and will be kept under observation by a medical team during their 14 day quarantine period.

Dr. Suwanchai Wattanayigchaorenchai, director-general of the Disease Control Department, explained that the 138 Thais were only provided one bottle of drinking water and a box of sandwiches during the four and a half hour flight back from Wuhan. He speculated that it was possible some of them were simply dehydrated, stressed and anxious, which could explain the elevated body temperatures.

Doctors are now assessing the condition of all the 138 returnees every 12 hours, along with a team of psychiatrists on standby to provide them with counselling if necessary. Video links have been made available to allow all passengers to chat to their families.

The spokesperson was speaking after health authorities liaised with Seoul medical authorities for information about a Korean woman who had been infected with novel coronavirus after returns to South Korea after a trip in Thailand, despite never visiting China.

Four evacuees from Wuhan kept in naval hospital for observation