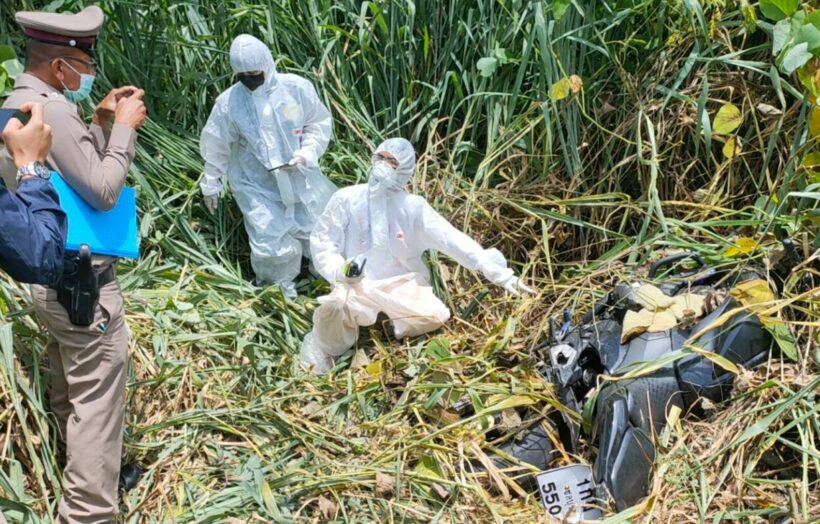 The discovery of the body of a man who died after a motorbike accident was made more tragic as police believe the victim survived the crash, but was trapped under his heavy motorbike, obscured by tall grass, just a few metres from a busy road. Nong Kham Police in Si Racha were notified this week after friends went looking for their missing friend and found his body, believed to have been dead for 8 days.

The accident took place at a curve in the road by a golf course on Amata-Nong Kwae Road in Bueng sub-district, coincidentally the same road that a recent motorbike crash victim was thought to be dead but was in fact just drunk and sleeping.

The 40 year old victim worked at an industrial company in Rayong and drove an 800cc “big bike”. His friends were unable to contact him for a week from August 18 and were concerned for his well-being. They checked at his home but he wasn’t there. They then called around local hospitals in the area to see if something had happened, some sort of accident or health condition that caused him to be hospitalised, but he was not at any hospital either.

Finally, the friends went looking for clues and traced his normal commute route from his job to his home. At the curve in the road, they spotted flattened grass and evidence that something had gone off the road there. They wandered into the tall grass to look closer and were shocked to find their friend’s body under his motorbike, hidden away in the tall grass.

Police believe the unfortunate man lost control of his bike at the curve and crashed into the grassy, wooded area just a few metres from the road and was injured but not killed. In his position and condition though he was unable to move his heavy motorbike over his body and remained trapped there until he died.

He remained there for over a week until his friends found him. The man’s friends and family will lay his body to rest this week.

JamesE
1 hour ago, Rain said: Now, how am I supposed to get this song out of my head? "There was only one thing Ray could say..."
Paco
wow, that is sad, next to a busy road even..
gazmo16
A tragic way to go, surviving the accident but pinned under your bike unable to get help.  RIP Sir.

Coffee shop employee attacked while at work in Si Racha