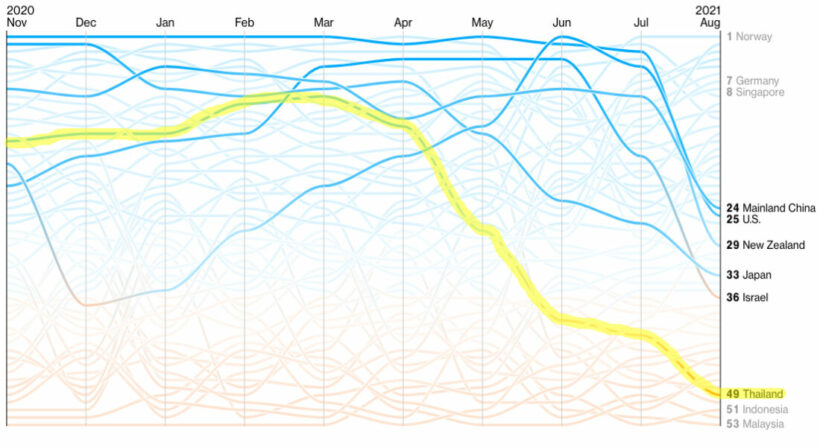 At one point, Covid-19 seemed like it may be under control and on its way out. But then the Delta variant emerged, throwing once-stable countries into infection chaos. Bloomberg compiles a monthly Covid-19 Resilience Ranking that tracks a number of metrics to rank what countries are the best to be in to weather the pandemic, and Thailand has fallen on the list from its previous high ranking down to the 5th worst of the 53 countries with the biggest economies the index tracks.

The list is ranked based on 12 factors including the spread of Covid-19, the amount of vaccination, the overall mortality rate, the quality of medical care, and border and travel restrictions.

The bottom of the list is dominated by Southeast Asia, with Thailand ranking 49th, followed by Vietnam, Indonesia, Philippines, and at the very bottom rank, Malaysia. Southeast Asia has become the global epicentre of Covid-19 with the world’s highest monthly death toll per capita. Malaysia has relatively high vaccination rates for the region, nearly half of the population, and has been attempting to reopen borders, but their new cases per 100,000 is amongst the highest in the world. Their 2021 economic growth target was also halved due to Covid-19.

Thailand ranked beneath developing economies in regions like the Middle East and even ranked lower than India, where the Delta variant was first identified. Singapore, on the other hand, whose 77% Covid-19 vaccination rate is second only to the United Arab Emirates, ranks number 8 on the list, up 3 spots from last month.

Since the list was started last November, New Zealand has topped the list more than any other country, but this month it fell halfway down the list from 3rd to 29th after a small outbreak of Covid-19 prompted strict lockdowns. The United States that had been climbing steadily in rank with the abundance of vaccines now fell 20 spots to number 25 as people opting not to vaccinate are ending up hospitalised by the Delta variant.

Now Europe and Scandinavia are topping the list with Norway ranked as number one, followed by The Netherlands, Finland, Ireland, and Austria. Norway has had a fast vaccine rollout that kept the death rate low and allowed them to open borders to travellers who were fully vaccinated. The Netherlands climbed 12 places with high vaccination rates that are likely to keep mortality low.

Guest1
7 hours ago, DoUKnowWhoIAm said: They're not doing so great on the Traffic-Death-Resilience list either. Oh, they do! Because a traffic death is non, after some days in hospital and then dying. Often it is even only then a traffic…