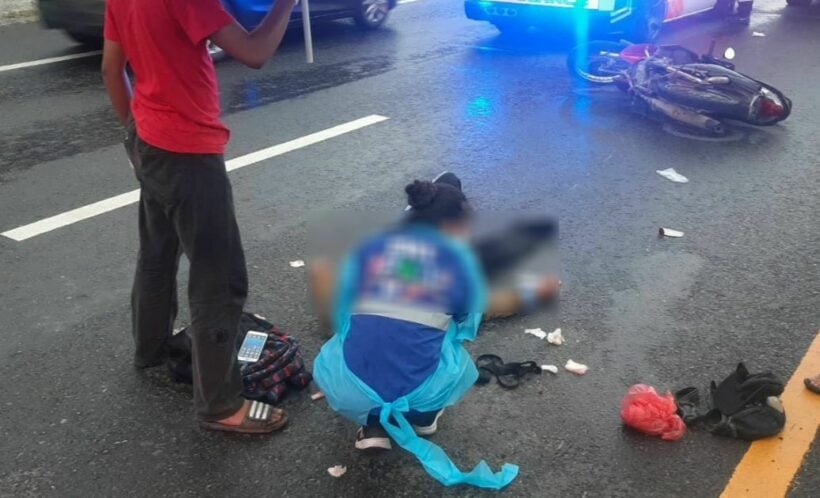 Rescue workers arrived to an all-too-familiar scene: an accident with a motorbike strewn across the pavement and, a bit beyond, its unfortunate rider lying motionless on the road. They assessed the accident and approached the body to conduct an examination and physical health check. But as they began, they were shocked when the man suddenly woke up.

The incident took palace at 5:30 pm Wednesday on the Nong Kwae – Amata City Road in the Borwin sub-district of Si Racha, and rescue workers were startled when the man they thought must be dead or at least seriously injured was merely severely intoxicated and had fallen asleep after the crash.

Several witnesses reported seeing the man, a 25 year old security guard at a nearby company, swerving erratically while driving prior to losing control of his bike and crashing. When the motorbike accident was reported, bystanders were sure he had died in the accident.

The man said that he was leaving a party with his friends after work and was quite drunk. The accident came as he was driving home when he lost control of his motorbike. The crash had thrown him clear of the bike, and though he was uninjured, he was so drunk that he was unable to pull himself to his feet. He ended up falling asleep on the road until he was woken by being prodded at by rescue workers assessing his condition.

The drunk driver survived the crash without any injury. Police did not say if there would be any charges for drunk driving (or drinking at a party in violation of the Emergency Decree).

Bluesofa
That's quite similar to what I witnessed about fifteen years ago. Two of us were on a trip from Pattaya to Udon. I had a Honda 400, my mate had a Harley. We broke the journey and stayed overnight a…

DoUKnowWhoIAm
54 minutes ago, Thaiger said: the man they thought must be dead Luckily, he wasn't cremated.

AdvocatusDiaboli
3 hours ago, Thaiger said: the accident First accident report that did not involve covid in many a month. Though are the accident tolls still out stripping the accidents in Thailand this year? Some honest reporting still needs to occur.…
Paco
Funny and lucky

Heavy rains in Pattaya bring some fun but also casualties