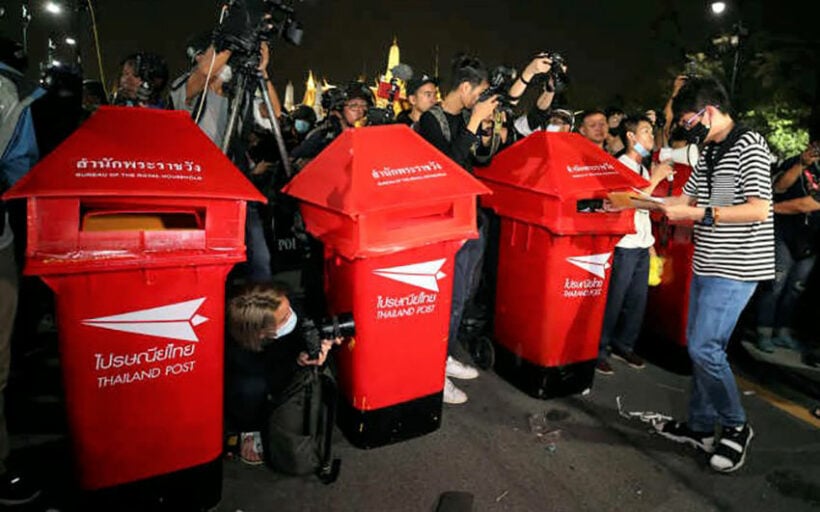 Police in Bangkok say they will be reading the contents of 4 red letter boxes used at a rally in the capital on Sunday in order to decide whether or not to press charges. Pro-democracy protesters used the letter boxes to drop hand-written petitions and letters calling for reform of the Monarchy. The letters were addressed to HM The King.

The red boxes, fashioned out of large red garbage bins decorated to look like Thailand Post mailboxes, were put to use after police blocked activists from marching to the Palace’s Household Bureau to deliver the letters to the Royal Household Bureau.

Piya Tawichai, from the Metropolitan Police Bureau, says the decision to charge protesters will depend on the content of the letters. He added that officers are also investigating the throwing of an apparent smoke bomb at Sunday’s rally. He also defended the police’s use of water cannons, saying they were only deployed after officers issued a warning to stay back, they were not aimed directly at people (which is a mis-statement as evidenced in several videos), and the water was not laced with any chemicals.

Police say Sunday’s protest violated a restriction on mass gatherings, with Piya saying those involved did not seek permission in advance of holding the rally. He says the investigation is ongoing and police will look at the evidence before deciding whether or not to press charges.