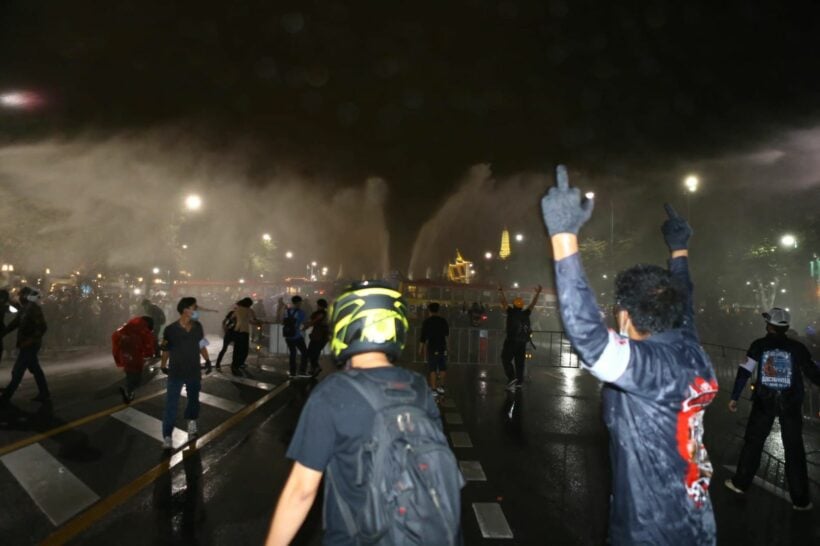 For a second time Thai police have turned their high pressure water cannons on protesters. This evening police aimed the water cannon at the anti-government protesters in an effort to stop them from continuing their march to the Royal Household Bureau at the Grand Palace. 3 protesters were injured in the exchange and were taken to hospital in an ambulance.

The last time police used the water cannons, laced with blue dye, was on October 16 at the Pathumwan Intersection.

Protesters stated during the week they wanted to deliver a formal letter from the protest organisers along with personal letters from other protesters. The letters prepared by the protesters had been placed in huge mail boxes ready for delivery to the Royal Household Bureau. Earlier in the day  the rally organisers asked attendees to bring paper and pens to prepare posters and placards.

The protesters reached the area outside the Supreme Court building at the royal parade grounds at Sanam Luang, adjacent to Thammasat University Tha Prachan campus, on their way to submit their letters, mostly listing their support for reform of the Thai monarchy. 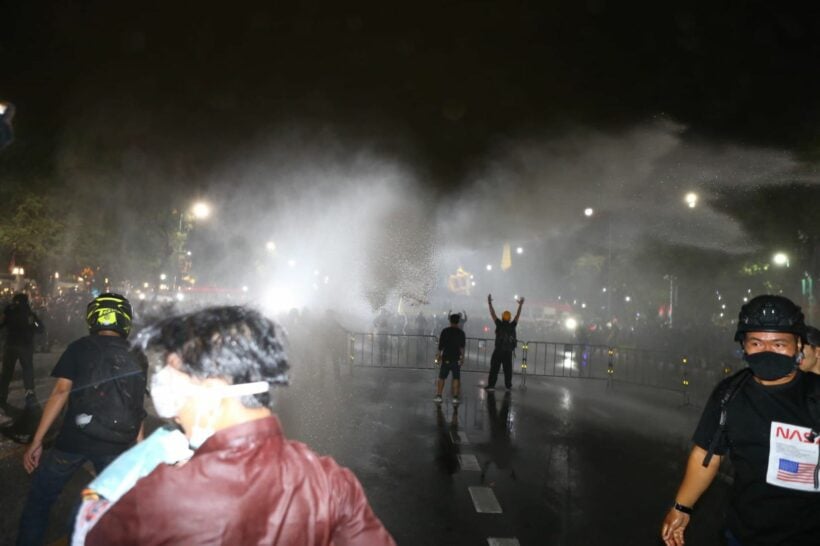 Police had already set up road blocks along the Royal Plaza and outside Government House. Later they set up a blockade outside the Supreme Court. The protesters announced during the week that they would assemble at 4pm at the Democracy Monument then march to an undisclosed location. Police had some 9,000 officers ready to meet and control the protest group.

After being drenched with water as they tried to break through the blockade at the Supreme Court building they marched, again peacefully, to the Sanam Luang Royal Parade Ground. Negotiations between senior police and protest leaders diffused the situation.

At 7.50pm protesters forced their way past another blockade, removed the barbed wire and pushed some of the buses and metal barricades out of the way. Protesters are demanding to be able to deliver the letters to the Royal Household. The police didn’t intervene.