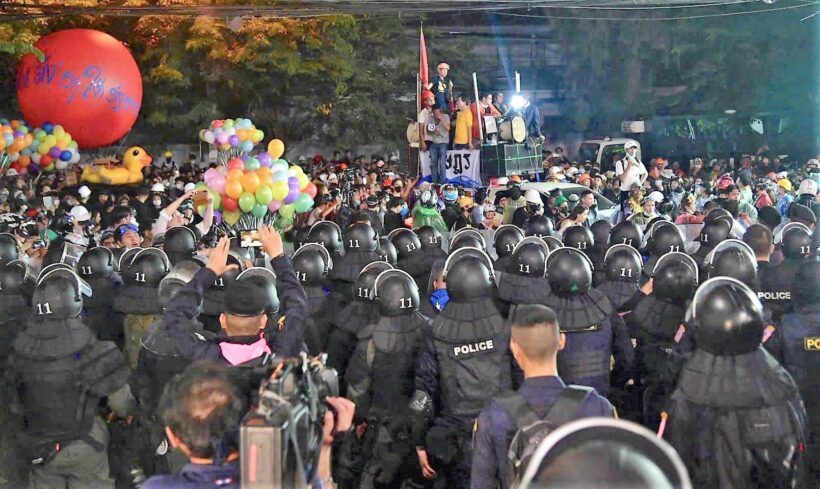 The Erawan Emergency Medical Service Centre in Bangkok says around 55 people have been injured following clashes during yesterday’s protests in the capital. Violence erupted as pro-democracy activists attempting to reach the Parliament building, clashed with police and rival yellow-shirt pro-establishment groups.

A spokesperson for the medical centre says 32 people have been injured by tear gas, which police used alongside water cannons, in an attempt to hold back protesters. The centre adds that a further 6 people were shot, 4 were taken ill, and 13 reported various other symptoms.

“37 people were sent to Vajira Hospital, 5 to Phramongkutklao Hospital, 4 to Praram 9 Hospital, and 1 each to Rajavithi Hospital, Phetcharavej Hospital, Klang Hospital, Lerdsin Hospital and Mission Hospital.”

Pro-democracy activists from the Ratsadon (People’s Party) group rallied in the vicinity of the Parliament building as MPs and senators met to vote on 7 draft constitutional amendments, including an amendment submitted by human rights group, iLaw. This bill is aimed at reform of the Monarchy to allow for greater accountability.

Clashes broke out when police used water cannons and tear gas as protesters attempted to dismantle barricades preventing them from reaching the Parliament building. Police say a flare and a firecracker were also thrown at officers.

Parliamentarians are set to continue the debate on the iLaw bill today, but political commentators say the chances of it being approved are slim.