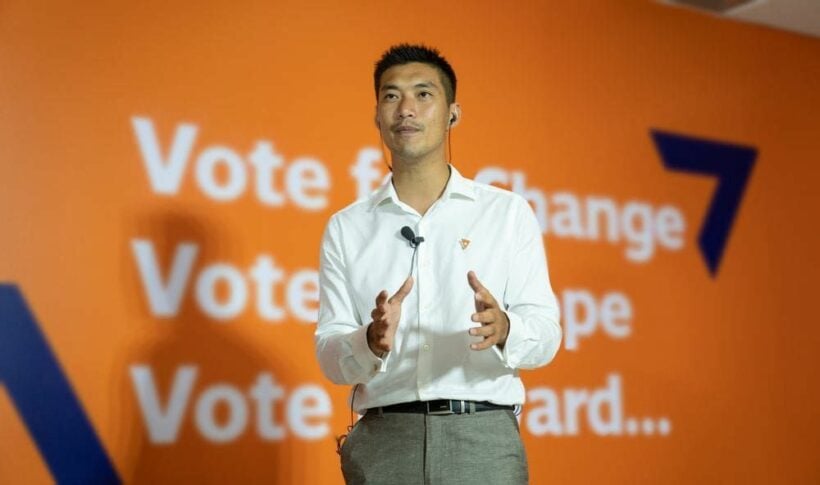 Thanathorn Juangroongruangkit says that, if the opposition bloc wins the by-election in Nakhon Pathom on October 23, it will be the first domino to fall and set the stage for a change of government. Nakhon Pathom is directly north-west of Bangkok.

The Future Forward party leader was telling supporters over the weekend that there will be more by-elections in Samut Prakan, Kamphaeng Phet and, probably, two constituencies in Nakhon Ratchasima.

He urged the people to vote for the Future Forward candidate if they don’t like the government of Prime Minister Prayut Chan-o-cha.

He said that, if the party wins the by-election in Nakhon Pathom, it will improve the chances for the opposition to triumph in by-elections in other provinces because the Nakhon Pathom’s victory will be just the first domino to fall, toppling others until there is a change of government.

The core government party, Palang Pracharat, has decided to skip the by-election to pave way for the Democrats to compete against Future Forward. The democrats, who won the fourth most vote in the March 24 election, eventually sided with Palang Pracharat to form a coalition government, whilst earlier swearing they would never support Prayut Chan-o-cha to be Thailand’s Prime Minister.

Mr Warawut, also natural resources and environment minister, said he had not yet been approached by the Democrats about skipping the poll, but he noted that Nakhon Pathom has been the political base of the Sasomsap family for several generations.

Jumpita Chandarakachorn of Future Forward party won the March 24 election for Nakhon Pathom, followed by Democrat candidate Surachai Anutto, Palang Pracharat Rawang Netphokaew and Padermchai respectively. But she never attended a parliamentary meeting because of her medical condition following an accident. She eventually formally resigned on September 10 paving the way for the forthcoming by-election.