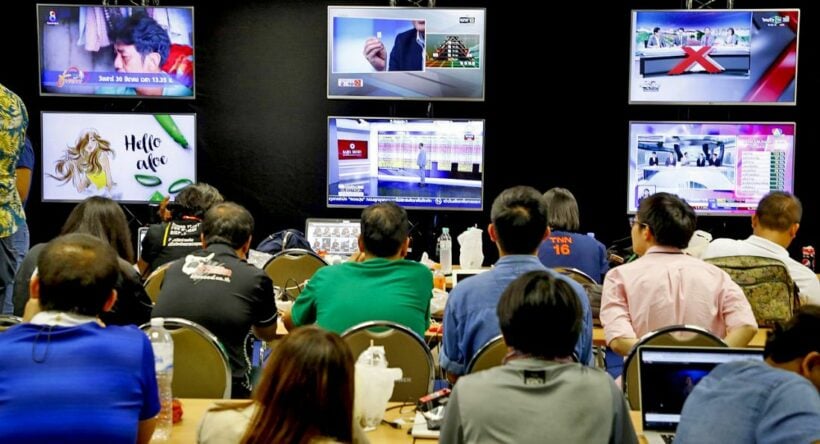 Pheu Thai and Phalang Pracharat were running neck-and-neck last night as ballots were counted around the country. The major parties swapped poll position as the night went on.

As of 10.30pm, with 92 per cent of the votes counted, the pro-junta Phalang Pracharat appeared to have beaten Pheu Thai with a total of 147 seats – 92 constituency MPs and 55 party-list.

Yet, when the ballot count hit 93 per cent, Pheu Thai had moved forward with 153 seats, while Phalang Pracharat ended with 142 seats.

Results for the rest of the parties on the third to fifth place did not vary much.

Political newbies Future Forward made major inroads, becoming the third biggest party with 85 seats – 29 for constituency MPs and 56 for party-list. Future Forward appears to have won the most party-list seats.

Bhumjaithai came in fourth with 54 seats – 43 constituency MPs and 11 from party-list. The Democrats had a dismal showing in the election and failed to make an impact on voter’s minds. Democrat leader Abhisit announced his resignation at 9.50pm.

Democrats won no seats in its stronghold of Bangkok. Of all 30 districts, 11 went to Pheu Thai, PPRP won another 10 and Future Forward won the remaining nine. Future Forward, in their first outing as a new party, were the big surprise of the evening.

Reports of vote tampering will be investigated by police