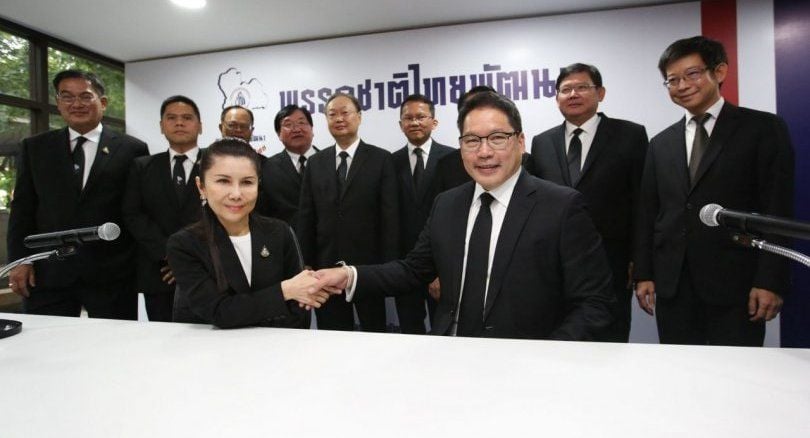 PHOTO: The Nation – Palang Pracharat pose for a show of unity amongst complete turmoil

Democrats walking out of meetings, deals made then broken days later, pending court cases over MPs’ eligibility – it’s never a dull day in Thai politics as we stumble towards a new parliament.

Here are the current important milestones you need to know about…

• After last weekend’s house elections for the leaders and deputy leaders of the House of Representatives and Senate, HM The King must now endorse the nominated candidates, voted by MPs and Senators. Only after that step can the parliament look to a vote on the crucial PM position.

• Somsak Thepsuthin, leader of the Sam Mitr (Three Allies) faction of the pro-army Palang Pracharath Party is scoffing at rumours he would take his 30 MPs and defect to the Pheu Thai Party unless his group gets the Agriculture and Cooperatives Ministry portfolio. This morning he’s denied the rumours.

• Palang Pracharat politicians say they will revisit Cabinet portfolio offers for a potential coalition after key potential partner parties (Democrats and Bhumjaithai) expressed discomfort at the involvement of the junta chief in deciding ministry posts.

• Yesterday’s ‘Animal Farm’ gaff will do nothing to help the credibility of caretaker PM Prayut Chan-o-cha. Prayut recommended the book for Thais, citing something about the co-operation of the animals in the book. He appeared oblivious to the irony of the situation where Orwell’s famous book was about the failure of democracy and the emergence of dictatorships. Some in the media are describing the gaff as Prayut’s ‘watch’ moment (in reference to Prawit’s luxury watch scandal). We’ll just call it ‘FarmGate’ for now.

The longer all the horse-trading continues the less chance there will be for any one group to form a solid majority and lead a viable government. Certainly there will be little mandate for any party as no clear majority has been won following the March election.

The posturing and walk-outs should be seen as nothing more than diva tactics to grab media attention and focus attention on one faction’s claims and demands. The real negotiations are being held behind closed doors and during long phone calls. As of Friday afternoon it would be difficult to predict the next step. But the afternoon is young…