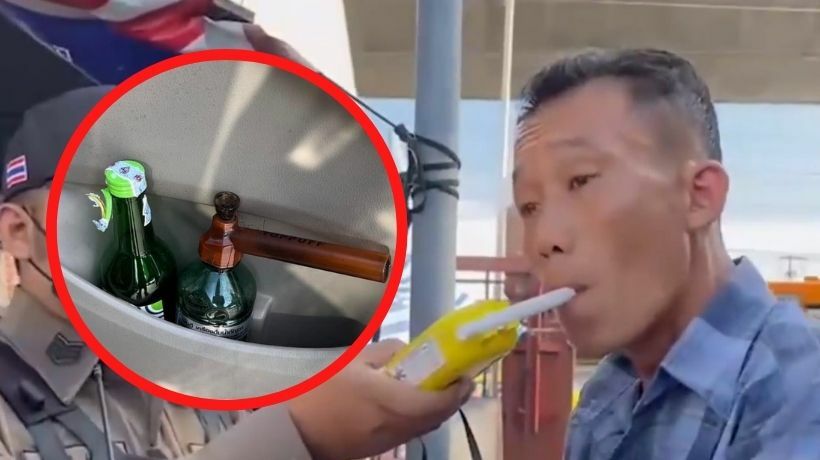 A taxi driver faces prison after allegedly attacking a policeman while under the influence of alcohol and fleeing the scene.

The taxi driver, Charoensak Boonchuay, was spotted driving erratically by a police officer, Pongpan Ponchai, on his way home from work yesterday.

Pongpan followed Charoensak until he parked his green and yellow cab in front of Huachiew Chalermprakiet University near Suvarnabhumi Airport, and parked his motorcycle in front of the taxi to prevent any escape. But that didn’t stop the 39 year old cab driver, who revved up and drove his taxi into the officer’s bike.

The cab driver then panicked. He got out of his vehicle and assaulted the police officer before fleeing the scene, calling for help and shouting he was being bullied by a police officer.

Fortunately, police officers from Patrol and Special Operation Division were passing by the incident and helped Pongpan arrest Charoensak.

The police officers checked his alcohol level and 184 milligrams were found in his system. The Land Traffic Act recommends that a driver does not drive with levels over 50 milligrams. The police also recovered some Soju liquor and a cannabis pipe from the taxi driver’s vehicle.

According to the Land Traffic Act, drunk drivers could face a 1-year jail sentence, a fine between 5,000 to 20,000 baht, or both, and the driver’s license could be suspended for at least 6 months or revoked. As the driver tried to attack the police officer, assault is likely to be added to the list of charges.

Guest1
If his taxi would be a Ferrari and the officer dead, he would not have to face prison. 🙊
Fanta
Drunk taxi drivers…. they need a bigger book to throw at people like these.