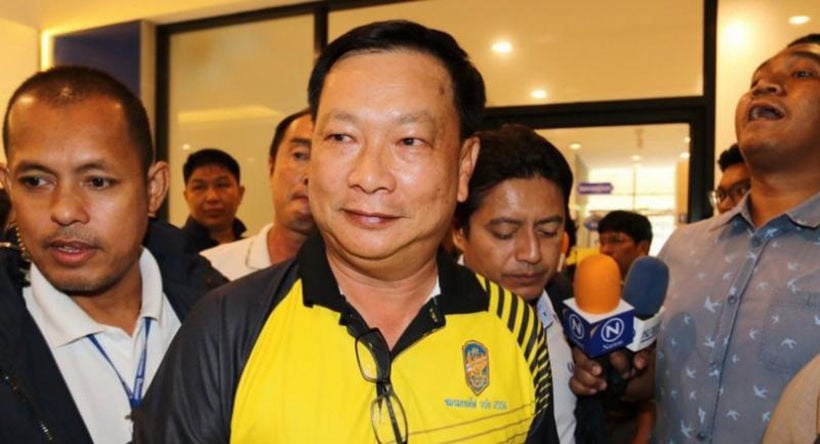 UPDATE: According to Thai PBS World, former deputy commerce minister Banyin Tangphaporn tried to commit suicide at a maximum security prison last night, after prison officials uncovered alleged plots to kidnap the wife of the prison warden to hold hostage in return for his release, and to escape while being taken to the court on Monday, if that plan failed.

Informed sources in the Corrections Department say officials managed to intervene and save Banyin as he attempted to hang himself in his cell. They say that Banyin was transferred from Bangkok Special Prison to Bang Khwang Maximum Security Prison after officials learned that he had allegedly hired a former inmate to kidnap the wife of the warden of Bangkok special prison in Lampang province.

If the plot did not work out, the former inmate and accomplices were allegedly to try and seize Banyin as he was escorted from prison to court for a hearing on Monday.

ORIGINAL STORY: In yet another twist to a criminal case that stretches credulity, the Crime Suppression Division is investigating an alleged jailbreak plot by murder suspect Banyin Tangpakorn involving a threat to kidnap the wife of a prison chief. A source at the CSD told reporters of the investigation yesterday.

Banyin, a former MP, deputy commerce minister and police lieutenant, is in prison for forgery and is accused, along with 5 other suspects, of kidnapping and killing the brother of a senior Bangkok judge. The abduction was allegedly intended to pressure the judge into dismissing a 300 million baht stock fraud case against him.

According to the source, the CSD learned of the escape plot early this month when a team arrested 42 year old Suthon “Joe” Thongsiri in Bangkok’s Bang Kapi district, shortly after he was released on bail from Bangkok Remand Prison. Suthon was arrested again on a separate warrant.

He told officers he’d met Banyin in prison and was approached to help plan the escape. He said if the jailbreak attempt failed, he was to kidnap the wife of the prison commander to negotiate for Banyin’s release.

Over 100 arrested for illegal motorcycle night racing in Nonthaburi