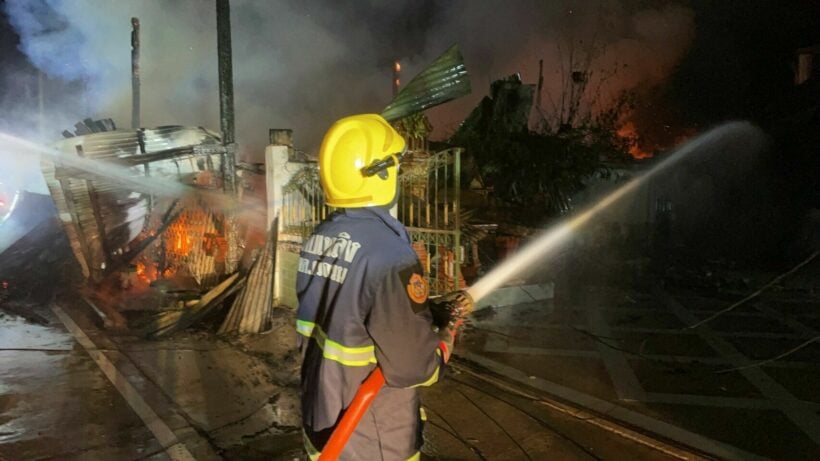 PHOTO: An elderly woman stopped thieves from stealing her things by setting them all on fire. (via Facebook เพื่อนข่าวเรารักกันชลบุรี)

If an intruder breaks into your house, you have some options of how to react, but an old woman in Chon Buri discovered that maybe you shouldn’t respond by setting your house on fire. The old woman heard thieves trying to break into her house in the Hua Tanot sub-district of Panat Nikhom. She lives alone, and when she heard the break-in, she thought she could scare them away by turning on her gas stove and burning a few things from around the house.

The 77 year old woman said she wanted the burglars to know that, while she may be old, that doesn’t make her an easy target, and they wouldn’t get away with theft. She set the small fire and after she believed that she had scared the thieves off, she attempted to douse the flames with some water. But in her wooden house, the fire spread quickly and the whole house was soon engulfed in flames.

The woman fled her home and called the police and firefighters for help. Panat Nikhom Police were notified just after sundown and dispatched several fire engines to her house. They found the old woman waiting calmly outside for the police, seemingly unaffected by her entire 2-story home going up in flames. Firefighters worked for 30 minutes to bring the blaze under control and the house was essentially destroyed.

The story of a woman hearing thieves breaking into her home and scaring them off by setting her own house on fire may seem like a perfect example of “things going from bad to worse” but just wait, as this story goes from bad to worse to worst.

Police investigating the remains of her house and the local area couldn’t find any evidence of a break-in or robbers in the neighbourhood, though, given the state of the home, they clarified they were not denying the elderly woman’s claim. But, she was taken to the police station because, despite whatever her motivations were, burning down a house, even her own, is still arson and still a crime. A spokesman for Panat Nikhom Police confirmed that, pending investigation, the woman will face legal action as a result of the house fire.

So, if you hear someone breaking into your home, be careful, stay safe, and alert the police. But maybe don’t respond by setting your house on fire.