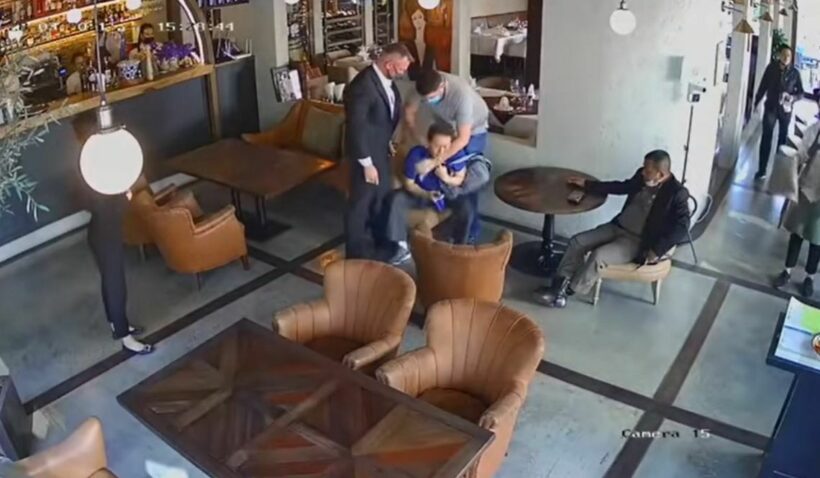 An American suspect in the multimillion dollar kidnap for ransom case in Bangkok, which was said to be over a failed business deal on rubber gloves, allegedly tipped off CNN about used medical gloves shipped from Thailand to the US. CNN published an investigative report this week saying tens of millions of used medical gloves, some with blood stains, were imported to the US from Thailand.

Back on March 28, Taiwanese businessman, 60 year old Wen Yu Chung, was reportedly abducted in broad daylight at the L’Oliva restaurant in Bangkok’s Thong Lor area where he was said to be meeting to resolve a failed business deal. Wen had allegedly sold rubber gloves for 93 million baht, or US$2.7 million, but the gloves ended up being poor quality. Video surveillance camera footage shows a man being forced out of the restaurants. He was allegedly taken to a nearby room on Sukhumvit Soi 36 where several men were waiting.

Two Americans, a Thai police officer, and a Thai man, were arrested for their alleged involvement in the kidnap for ransom attempt. They are accused of holding the businessman captive and demanding US$3 million from his family for his release. Reports say the family contacted the authorities, and Wen was later dropped off at a hospital. One American suspect was arrested at an airport in June as he was trying to flee the country.

One of the American suspects, Louis Ziskin, was interviewed by CNN and told reporters that he decided to travel from the US to Thailand after losing millions of dollars from the failed business deal. Louis, who they say is the CEO of the American company AirQueen and spent US$2.7 million on nitrile gloves from the Thai-based company Paddy the Room through a third party based in Asia. He told CNN 100% of the money was paid up front.

CNN says Thai police missed their deadline to submit evidence in the cases and Louis was allowed to fly back home to Los Angeles. Louis has denied the charges and says he wasn’t there when the kidnapping took place. CNN also mentioned that Louis is an ex-convict that spent more than a decade in prison for smuggling ecstasy into the US in 2000.

“I’m going to see this through to the very end… Am I going to get my money back for the company? Most likely not. Are we bringing a light to this to where hopefully, the United States can get up off the bench and stop it? Yeah. If that’s what justice is, then that’s what my hope is.”

According to a previous Bangkok Post article, Wen was a representative of the Collection Company Limited. The company had been hired in late 2020 by Louis Ziskin to negotiate with Paddy The Room Trading Company Limited for the purchase of nitrile gloves, the Post reported.

Louis reported the substandard gloves to US authorities earlier this year and the US Department of Homeland Security cleared out his warehouse in LA in July. CNN says 70,000 boxes were seized as evidence for the investigation into Paddy the Room.

Thai police told CNN that the investigation into the kidnap for ransom case is still open. In response to the CNN report, Thai authorities have been looking into the claims. PM Prayut Chan-o-cha ordered the Deputy PM and Commerce Minister, Jurin Laksanawisit, to investigate. National police chief Suwat Jangyodsuk also instructed the Central Investigation Bureau, or CIB, to look into the report.

Here’s video allegedly showing the arrest of Mr. Ziskin and CCTV from the alleged kidnapping…

Poolie
1 minute ago, gummy said: Possibly discredited by those who believe otherwise but as with all media they have their own agendas anyway Yeah it's just a matter of whether they are believed or not. As it's anti-Thailand I suspect…
LoongFred
5 hours ago, Thaiger said: An American suspect in the multimillion dollar kidnap for ransom case in Bangkok, which was said to be over a failed business deal on rubber gloves, allegedly tipped off CNN about used medical gloves shipped…