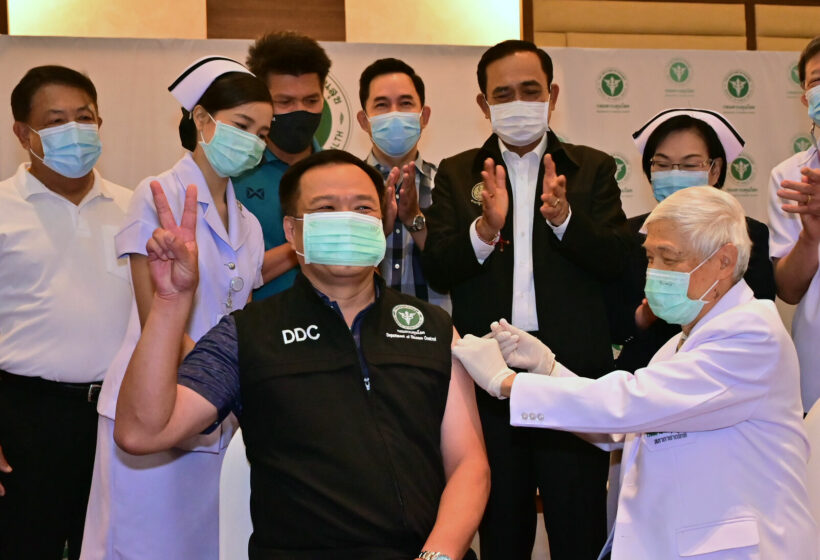 As the government plans to administer booster vaccines to 70% of the elderly population before Songkran, Thailand’s health minister is urging them to come forward. According to a Bangkok Post report, Anutin Charnvirakul is telling 2.1 million elderly people to make sure they’re protected before the Thai New Year holiday next month.

The Department of Disease Control is liaising with public health offices around the country to ensure as many people as possible can be inoculated as quickly as possible. Anutin says village health volunteers and religious leaders are being asked to talk to senior citizens in their areas and encourage them to get vaccinated.

The health minister says people should try to get their vaccine around 3 weeks before Songkran, pointing out that it takes some time to build up immunity. Health officials are anxious about the potential fallout from people returning to their home provinces over the holiday and visiting elderly, unvaccinated relatives. Those who plan to travel to their home provinces have been advised to avoid high-risk activities before travel, to minimise the risk of contracting the virus and spreading it to vulnerable family members.

Meanwhile, Dr Prasit Watanapa from the Siriraj medical school at Mahidol University is hopeful the situation after this year’s Songkran will not be as concerning as last year’s, due to a combination of Thailand’s high vaccination rate and the dominant strain being the less severe Omicron variant. However, he says the elderly and other vulnerable groups still need to get vaccinated to ensure they’re protected.

According to the Bangkok Post, Prasit says 50% of those who died from Covid-19 during the first 3 weeks of March were not vaccinated at all, 30% had received their second dose 3 months before becoming infected, while 10% had received only 1 vaccine dose. Prasit says this data shows that 90% of those who died were inadequately protected against Covid-19.

DoUKnowWhoIAm
6 minutes ago, Thaiger said: Anutin Charnvirakul is telling Find someone more trustworthy and it might actually work.