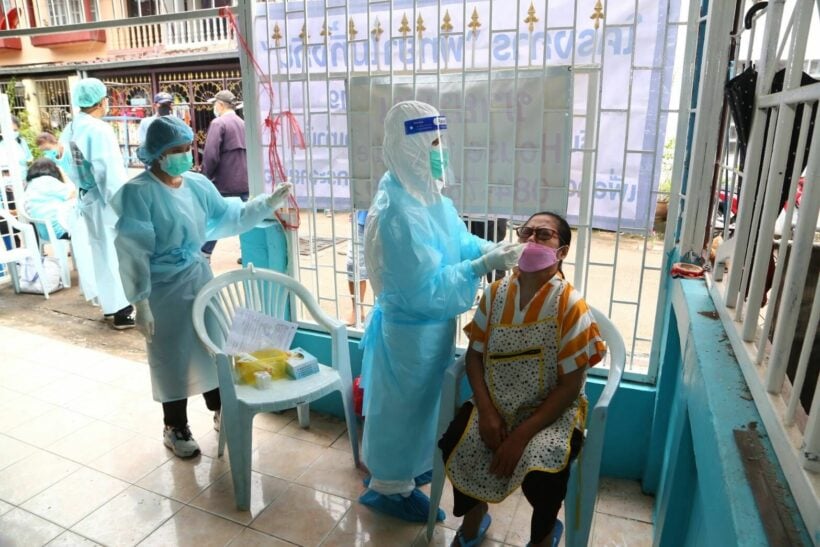 The government’s Covid-19 task force expects overall case numbers to level off and start dropping soon, but 10 provinces could still see rising numbers. Yesterday, Thailand reported 14,900 new infections and 26 Covid deaths, compared to 15,882 cases and 25 deaths the day before. Bangkok reported 2,892 and 10 deaths, with daily infections doubling during the first 6 weeks of the year. Samut Prakan, Chon Buri, Nonthaburi and Phuket have all experienced a similar spike, leading officials to conclude these provinces may soon start to see declining infection numbers.

However, the Bangkok Post reports that the CCSA is closely monitoring 10 provinces that have not reported any significant rise in infections, meaning that for them, the surge could still be on its way. According to the report, the provinces are Khon Kaen, Chiang Mai, Pathum Thani, Maha Sarakham, Rayong, Roi Et, Chachoengsao, Suphan Buri, Saraburi, and Phetchaburi.

“All of them had underlying illnesses. 14 were unvaccinated. 2 had received 1 vaccine dose. 2 others had their second dose more than 4 months ago. 2 had already received their third dose but had not reached the time when their immunity would peak yet.”

She went on to say the outlook for the country remains positive and the infection rate is expected to stabilise and begin dropping this week. She has warned against complacency, however, pointing out that many provinces are battling a surge in cases, with 80% of infections caused by the Omicron variant and 20% being Delta. Apisamai has expressed concern that the number of patients in need of respirators is expected to rise.

“It would not be correct to conclude that Omicron is less severe.”

Stonker
On 2/15/2022 at 2:07 PM, Fundok said: with the experience made in my region (Switzerland) and the neighbouring countries one can say that yes, Omikron is clearly less severe than Delta. Well, what one can actually say is that despite your views…
Tim_Melb
11 minutes ago, Fundok said: Agreed: this virus ist there to stay, and it likely that there will be other variants that will manage to "escape" the protection provided by vaccines to a smaller or larger extent. Your thesis, that…
Stonker
22 minutes ago, Fundok said: Your thesis, that mask wearing will prevent this, needs yet to be ascertained and underpinned with empirical evidence. It's not "his" thesis - it's been subject to countless scientific tests and "empirical evidence" in countless…

Fundok
9 hours ago, Stonker said: It's not "his" thesis - it's been subject to countless scientific tests and "empirical evidence" in countless studies, many of which have been given here. People like you just don't like the studies conclusions so…

Fundok
9 hours ago, Tim_Melb said: Absolutely but I would make the point that constantly putting it on and taking it off becomes a chore and people will just stop putting it back on where as wearing it all the time…